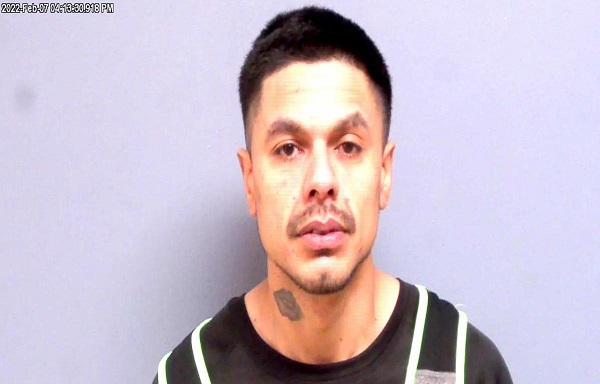 (Cushing, Okla.) — A Cushing man — on probation for burglarizing a car in the Cushing Walmart parking lot — has been ordered to appear before a Payne County judge on June 1 for a preliminary hearing on a charge of possessing a car that was reported as stolen from outside a Cushing man’s apartment.
Due to his criminal record, Julio Alan Mendez, 29, who remains jailed on $20,000 bail, could be given a prison term of four years to life if found guilty of possessing a stolen vehicle after two prior felony convictions, court records show.
Cushing police had been sent at 12:50 am on Nov. 22, 2021, about a possibly stolen vehicle being abandoned in the Wilshire Inn parking lot, according to an affidavit by Cushing Police Detective Jerrod Livergood. The vehicle had been reported as being stolen about 11 days earlier, police said.
Wilshire staff said that a man drove the car into the parking lot, asked about renting a room, and left on foot to get money from a girlfriend, the affidavit alleged.
A Cushing police officer searched the car in an attempt to identify the suspect and found a Walmart receipt dated the previous day for an automotive stop-leak product, the affidavit said.
“On Dec. 8, 2021, Officer Carpenter responded to the Wilshire Inn where the staff advised the suspect that left the stolen 2005 Buick about two weeks ago has returned and rented a room…The Wilshire Inn staff advised that the individual’s name is Julio Mendez,” the affidavit alleged.
When the Cushing police detective obtained footage and photographs from Walmart, he believed that the suspect was Mendez “from multiple previous encounters with him while employed as a police officer with the city of Cushing, his affidavit said.
According to Payne County court records, four months earlier on July 6, 2021, Mendez had pleaded guilty to burglarizing a 2007 Chevrolet on Dec. 6, 2020, in the Cushing Walmart parking lot, for which he was placed on probation for five years except for serving 60 days in jail. On March 1, 2022, Mendez was found in violation of his probation and given a 30-day jail term.
Ten years ago, Mendez had been charged in Creek County with child endangerment and drunk driving in 2012, for which he was placed on probation for four years and one year concurrently, court records show.