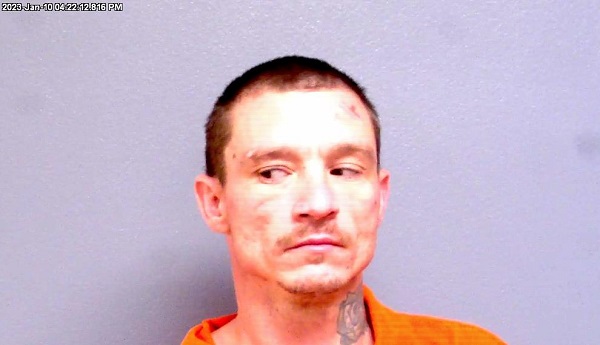 (Stillwater, Okla.) — A Cushing man with a history of property crimes has been jailed on $20,000 bail pending his arraignment Wednesday on charges of possessing a stolen motorcycle along with having methamphetamine and drug paraphernalia.
Due to his criminal record, James Henry Walker Jr., 37, could be sentenced to four years to life in prison if convicted of possessing a stolen 2006 Suzuki motorcycle. Walker could also be given two years in jail if convicted of his misdemeanor counts of possessing methamphetamine and a glass meth smoking pipe with residue.
Walker was arrested at about 3 pm on Jan. 9 in the 2500 block of E. 5th in rural Cushing after being apprehended by Cushing Police Sgt. Carson Watts and Payne County Sheriff’s Lt. Dan Nack, according to an affidavit filed last week.
A Cushing man had reported at about noon on Jan. 9 that his Suzuki GS 500, which he always parked in a certain spot at Southgate Apartments, had been stolen, Cushing Police Officer Sara Reynolds wrote in an affidavit. He said that he last saw the bike that was registered in his mother’s name on Saturday Jan. 7, the affidavit said.
The man later called to report “he had located his motorcycle on Harmony Road, and it was traveling northbound,” the affidavit said. He said it had been painted white, the affidavit said.
“While in route, dispatch advised the driver of the bike had pulled into the Middle School and dropped a female off before going back east toward Harmony…dispatch stated the driver of the bike had dropped the motorcycle and was now running on foot eastbound from 5th and Harmony,” the affidavit alleged.
The suspect, later identified as James Walker, “was described as wearing a black shirt, blue jeans, red tennis shoes, and had a mask on his face,” the affidavit alleged.
“Officer Tully Folden stated he just saw a male matching Walker’s description come out of the tree line. I quickly reversed back up the driveway where I drove up to the fence line and observed Walker running southeast back into the woods. Officers quickly began to search the immediate area of where Walker was last seen,” the officer alleged in her affidavit.
“I was later advised Walker had walked out of an area where Sgt. Watts and Deputy Nack were able to apprehend Walker without incident,” the officer alleged in her affidavit.
While Walker was being booked into the Cushing City Jail, he had a key ring with a vial containing a small plastic baggy with a crystal-like substance that tested as methamphetamine, the affidavit alleged. A sunglasses case had a glass pipe containing residue, the affidavit alleged.
According to the state Department of Corrections and Payne County court records, Walker had been released from prison in November of 2018 after serving one and one-half years of seven concurrent four-year prison terms for seven counts of second-degree forgery in Cushing, for which he was also ordered to pay $4,725 restitution.
Walker had also served portions of five-year prison terms for first-degree burglary in 2006, second-degree burglary in 2004, drug possession in 2006, drug possession in 2005, and uttering forged instruments in 2005, all in Payne County, DOC records show.