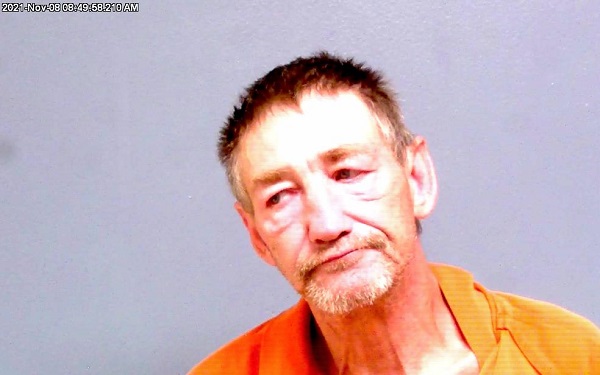 (Stillwater, Okla.) — A 56-year-old Cushing man accused of hitting his girlfriend on the head and scratching her on her arms has been ordered to appear in court on Dec. 6 on a felony charge of domestic violence as a second offense.
If convicted, Charles Dewayne Rosine, who remains jailed on $5,000 bail, could be given as much as a four-year prison term and a $5,000 fine, court records show.
Rosine was arrested at his residence on S. Cleveland Ave. at 11:25 pm on Nov. 7 by Cushing Police Officer Cody Carpenter, who had been sent to another location 25 minutes earlier on an assault and battery call, according to his affidavit.
Rosine’s alleged victim told the officer that she and Rosine “have an on-again, off-again relationship, but were living in the same house together currently,” the affidavit said.
The woman, who had a drink in her hand that she said she did not know was alcoholic, said “Rosine came into her room where she is living and started to ‘brutally attack’ her. (She) stated he hit her with something causing scratches on her arms and a bump on her head.
“(She) stated Rosine did this to get her out of the house where she has been staying,” the affidavit alleged.
When she lifted up her sweatshirt sleeves to show two distinct scratches on either arm, “I observed one to have what appeared to be fresh blood,” the officer alleged in his affidavit. Medics were called to check her head injuries and scratch marks, the affidavit said.
After the officer transported her back to Rosine’s residence to attempt to interview him, “I observed the household was dark with no lights on. I knocked on the door for several minutes until Rosine came to the door. I observed Rosine had a scratch mark on his left hand,” Carpenter wrote in his affidavit.
“Rosine stated (she) had been bothering him and his housemates for the past several days and would not let up. Rosine stated he attempted to throw (her) out of the residence because he wanted her gone. It should be noted that officers have responded to this residence because Rosine wanted (her) gone from the residence.
“Officers have told Rosine that (she) needs to be evicted from the residence to force her to leave,” the officer alleged in his affidavit.
“Rosine stated he took the matter into his own hands to get rid of (her). Rosine stated he grabbed (her) and threw her out of the house. I asked Rosine how (she) got the scratch marks and the bump on her head. Rosine stated she probably got them from when they were struggling and he was forcing her out of the house,” the officer alleged in his affidavit.
Asked if he hit the woman with any type of weapon, “Rosine stated (she) hit him with a tube or something and showed me a black tube. I looked over the tube and did not see any blood or marks indicating it hit anyone or anything. Rosine stated he did not hit her with anything.
“I asked Rosine if (she) hit him because he was trying to get her out of the house and he stated yes. Rosine stated he would ‘beat her up, drag her, or whatever I have to do,"” the officer alleged in his affidavit.
According to Payne County court records, five years ago Rosine was placed on probation for one year on misdemeanor counts of domestic assault and battery, and domestic assault and battery in the presence of minor in 2016.