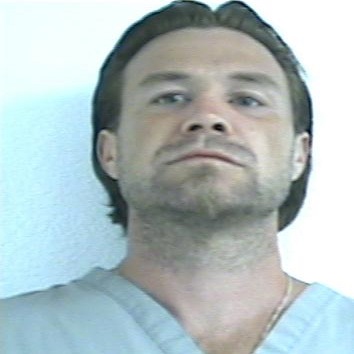 (Stillwater, Okla.) — An ex-convict, who was released from prison two years ago, has been jailed on $25,000 bail pending a Nov. 4 preliminary hearing on a Payne County charge of abusing his wife at her apartment in Stillwater.

Due to his criminal record, Lonny Ray Clark, 36, of Cushing, could be given as much as a life prison term if convicted of domestic violence.

Stillwater police were sent on Sept. 25 to the woman’s apartment on a report that Clark “was currently choking the victim,” an affidavit alleged.

A dispatcher later advised that the woman “had locked herself in her apartment and Lonny had left the area,” an affidavit alleged.

“Najera had his taser pointed at Lonny while giving him commands,” Rudluff alleged in his affidavit.

“Lonny had his hands on his head and was telling Officer Najera to come to him and he wouldn’t turn around as Najera was instructing him to do,” the affidavit alleged.

Officer William Cluck “told Lonny to get on his knees several times and he finally complied,” the affidavit alleged.

The victim, who was visibly upset and crying, said she wanted an ambulance, the affidavit said.

“She showed me her arm and her left wrist had an apparent deformity as if it was possibly broken. She also had marks on her arm and a scratch on her nose,” Rudluff wrote in his affidavit.

“She told me Lonny got drunk and they started arguing. She said he started attacking her and she eventually made it outside where the neighbor call 911. I asked her if he choked her and she said he did while they were outside.

“She told me that this wasn’t the first time this has happened, but it was the worst time,” Rudluff wrote in his affidavit. The officer said he would provide the woman with information for the Wings of Hope shelter in Stillwater, the affidavit said.

When the officer told Clark that he was under arrest for domestic violence, “He instantly became defensive and as Officer Cluck and I tried to escort him to the car he was trying to push against us,” Rudluff alleged in his affidavit.

“We had to push him most of the way to the patrol car. As I was searching him, he kept trying to turn toward me and Officer Cluck had to hold him while I searched him. Lonny had a small cut on his ear that we tried to take a picture of,” Rudluff alleged in his affidavit.

“As we walked away from the car, he started kicking the right rear door and then began kicking the rear window. Officer Whiteley had him lie down while Officer Najera and I placed leg restraints on him,” Rudluff alleged in his affidavit.

The officer was advised that the victim was going to be transported to Stillwater Medical Center for examination, the affidavit said. “I also learned that while they were fighting, (the woman) tried to call 911. While she tried to call, Lonny took her phone and broke it to prevent her from calling 911,” Rudluff alleged in his affidavit.

According to court records and the Oklahoma Department of Corrections, Clark was previously convicted of:

* domestic assault and battery in Cleveland County in 2018, a misdemeanor for which he was given a 90-day sentence in April of this year;

* methamphetamine possession in Perkins in Payne County in 2019, a misdemeanor for which he was placed on one year’s probation in June of this year;

* drug possession in Stroud in Lincoln County in 2014, a felony for which he was ordered into Drug Court in 2015 that was changed in 2016 to a six-year prison term;

* endangering others while eluding police in Lincoln County in 2014, a felony for which he was ordered into Drug Court in 2015 that was changed in 2016 to a concurrent six-year prison term that he discharged in December of 2017;

* first-degree arson in Davenport in Lincoln County in 2003, a felony for which he was given a five-year prison term followed by three years of probation that was revoked in 2009 to a two-year prison term.