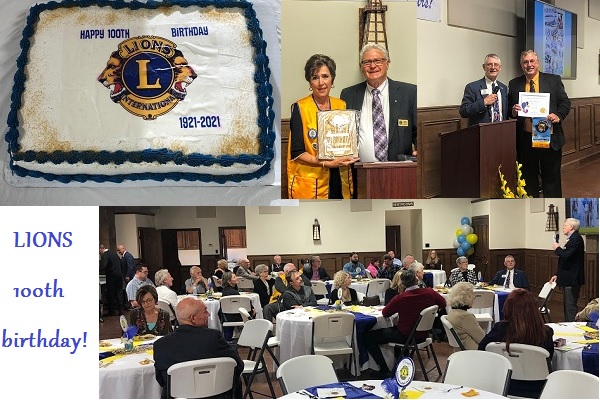 (Cushing, Okla) — It was April 1921 when the Lions Club of Cushing Oklahoma was formed to be a small part of a larger national order of Lions now known as “Lions International.” Several of the past major delegates started off right here in Cushing.

Lions International is the LARGEST service organization in the world with 46,000 clubs and 1.35 million members worldwide but Tuesday night, April 20, 2021, wasn’t about the 46,000, rather it was the most important one for Cushing Oklahoma, “Cushing Lions Club.”

Through the years the club grew over 100 members strong and occupied a pretty building on West Broadway in Downtown until the earthquake of 2016 took it away. Lifelong friendships were and still are formed among Lion
members. The dinner was meant to be a night of jubilation and reminiscence but not even a small portion of stories got to be told. It was also a night to honor Lions such as Lion Mary Kelly receiving her outgoing President’s plaque – overdue because of Covid19 for serving the 2019-2020 year. President Lion Russell Thurman and Vice President Richard Thackray along with Lion Lou Griffin were honored with Letters of Appreciation from the International President Dr. Jung-Yul Choi. Following the presentations a few speeches were made from dignitaries and dinner was served and time slipped away.

Though the evening was a time to reflect for old timers, it was time for looking ahead to the next 100 years for many new members. We will hold another gathering and hear the stories we missed and that will be fun and we would like you the citizens of Cushing and surrounding areas to join us at our meetings on Tuesdays held at the Steer Inn located on Main Street in Cushing.

If you don’t know a lot about the Lions, know one thing. Our motto is “We Serve”