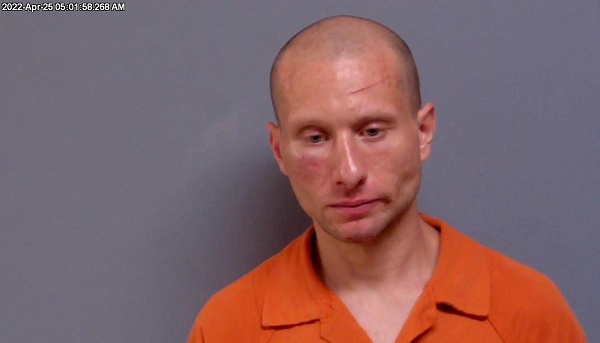 (Stillwater, Okla.) — A 33-year-old Cushing man with a history of drug and property crimes has been jailed on $20,000 bail pending a May 3 court appearance on a charge of kicking open the front door of an unoccupied house in Cushing on Maple Street and entering.
Due to his criminal record, Kaleb James Roe could be given a prison term of six years to life if convicted of second-degree burglary after multiple prior felony convictions.
When Roe was arrested at 10:50 pm on April 24 at a house being prepared for resale, he said “he knew he was going to prison,” Cushing Police Officer Matt Piatt alleged in an affidavit filed this week.
“While booking in Roe, he asked if I found the bag of dope inside the residence or was he only getting charged with breaking and entering. I told Roe he needed to check into a rehab, but he was being charged with breaking and entering,” the Cushing officer alleged in his affidavit.
A neighbor said, “I opened the back door and saw a guy in my alley. He was going past, then he jumped between the garages and came to the garage door. Then he went next door to an empty house and kicked in the door and went inside. I think he was on something,” the affidavit alleged.
Another man said that he arrived home about 10:25 pm on April 24 and saw his neighbors outside watching a man, the affidavit alleged.

“The neighbors said he had been either in their or my back yard. He jumped the fence between our garages and walked to the street when I arrived home. I called the PD and witnessed the man trying to enter the corner house. The door was locked so he kicked it in and entered,” the affidavit alleged.