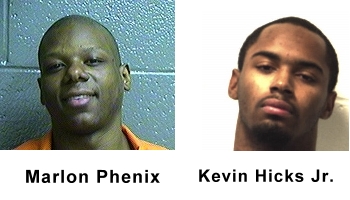 (Stillwater, Okla.) — Two convicts, who are serving long sentences for shooting with intent to kill, have been given five more years’ incarceration for severely beating a guard at the Cimarron Correctional Facility in Cushing, who suffered an ulna fracture, a large laceration, a collarbone fracture, a rib fracture, an eye contusion and a concussion on May 26, court records show today.

Marlon Deshun Phenix, 32, and Kevin Duvall Hicks Jr., 25, both pleaded guilty last week to punching the guard and kicking him with their feet, court records show.

According to state Department of Corrections records, both former Cushing prison inmates have been transferred to the Oklahoma State Penitentiary in McAlester.

Since 2017, Phenix has been serving five concurrent 35-year prison terms for one count of shooting with intent to kill, three counts of drive-by shooting, and one count of being a convicted felon in possession of a firearm, all in 2015 in Tulsa County, DOC records show.

After completing those sentences in 2052, Phenix must serve two concurrent 10-year prison terms for being a felon in possession of a firearm in 2015 and assault and battery on a detention officer in 2017, both in Tulsa County, DOC records show.

Phenix previously served one and one-half years of a six-year prison term he was given in 2016 for assault and battery with a dangerous weapon in Tulsa County, DOC records show.

Phenix also previously was given a two-year prison term followed by three years of probation, which was revoked in 2011, for two counts of shooting with intent to kill in Logan County in 2009, DOC records show.

Hicks Jr. was 17-years-old when he was convicted as an adult by a jury in Osage County of shooting with intent to kill in 2012 and sentenced to 25 years in prison, DOC records show.