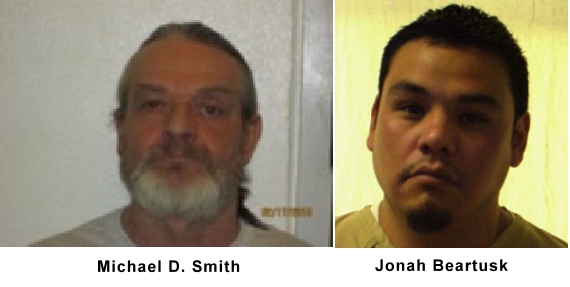 (Stillwater, Okla.) — A 60-year-old convicted armed robber pleaded guilty Friday to attacking a guard at the Cimarron Correctional Facility in Cushing by shoving him, pushing him to the floor, punching him and kicking him last year, court records show.

Michael Dale Smith, who has been in prison for the past 31 years, was given an additional two years’ incarceration by Payne County District Judge Phillip Corley to serve after he finishes eight concurrent life sentences, court records show.

Smith has been transferred from the private prison in Cushing to Oklahoma State Penitentiary in McAlester, state Department of Corrections records show.

His associate, convicted robber Jonah Edward Beartusk, 37, of Sapulpa, had already pleaded guilty to assault and battery on the same guard and was sentenced two months ago by Payne County Associate District Judge Stephen Kistler to two more years’ incarceration after he finishes the 16 years he has been serving for Tulsa County crimes since 2014.

Beartusk was transferred from the private prison in Cushing to North Fork Correctional Center in Sayre, DOC records show.

The injured guard had told Cushing Police Officer Jack Ford on Aug. 13, 2019, that he was assaulted by the two inmates while working the night shift at 9:17 pm, an affidavit said.

After locking down the lower level of Delta South, the guard said he had started locking the upper level and was approaching a cell when inmate Smith “grabbed him from behind in a chokehold,” the affidavit said.

The guard said “inmate Smith threw him to the floor, where at this time inmates Smith and Beartusk started stomping on (his) head and back area,” the affidavit said.

The guard said “both inmates also punched him in the head area,” before walking away, the affidavit said.

The guard said “he walked down to the bottom level and maintained a visual on inmate Smith,” but he could not see inmate Beartusk, the affidavit said.

After the guard walked under the balcony to retrieve his radio and keys, he cleared the showers and had to approach inmate Smith so he could exit the pod, the affidavit said.

The guard said, ‘he told inmate Smith to get back and inmate Smith was non-compliant to his verbal commands,” the affidavit said.

The guard said, “he deployed his OC fogger and then inmate Smith moved away from the door,” the affidavit said.

After the guard “called central command for a code 2 response, he was escorted to medical for an evaluation of his injuries,” before being sent to the Cushing hospital, the affidavit said.

An emergency room physician said that the injured guard “had a mild concussion, cuts on his face and ear, bruised head, neck, back and chest,” the affidavit said.

After being examined at the hospital, the injured guard was transported back to the prison where he was released from duty that morning, the affidavit said.

The Cushing police officer said, “I did see cuts, bruising and swelling on (the guard’s) head and ear,” the affidavit said.

Smith was also serving three concurrent life prison terms he was given in 1989, two of which were for unauthorized use of a vehicle in 1988 and one for possessing stolen property in 1988, all in Oklahoma County. Smith had discharged a 20-year prison term in 12 years that he was given for second-degree burglary in Grady County in 1982. Smith had also been convicted in 1996 of carrying contraband into the Hughes County Jail for which he was given a five-year prison term.

At the time of the attack, Beartusk was serving three concurrent 16-year prison terms that he was given in 2014 for first-degree robbery, first-degree burglary and car theft in 2013 in Tulsa County, DOC and court records show.

Beartusk had been given a seven-year suspended sentence for second-degree burglary in 2012 in Wagoner County. Beartusk had also been given an 18-month prison term in 2004 for placing a body fluid on a government employee in 2004 in Tulsa County, DOC records show.