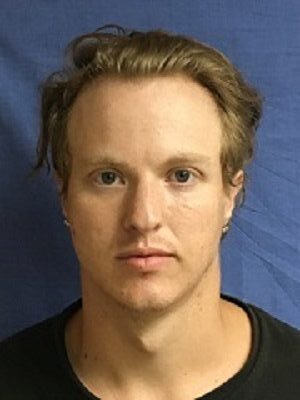 Gregory L German
Posted on October 14, 2021
By Patti Weaver
(Stillwater, Okla.)  — A convicted sex offender on probation for raping a 15-year-old girl in Stillwater has been given a two-year prison term followed by three years of probation for attempting to elude Payne County Sheriff’s Deputy Scott Hopper by speeding up to 105 mph on Western Road and endangering other drivers by passing in no-passing zones.
Gregory Lee German, 23, a homeless man who had been living by the Stillwater Creek bridge, pleaded guilty last week to attempting to elude on July 15 of this year and to being a sex offender in violation of a safety zone by being within 300 feet of Couch Park in Stillwater on July 13 of last year.
As part of a plea bargain with the prosecution on Oct. 5, German was ordered to pay $1,560 in fees, perform 80 hours of community service and enroll in Work Force Oklahoma after he serves his prison term. German was given a concurrent one year in jail for his sex offender violation by Associate District Judge Stephen Kistler.
On July 13, 2020, at 5:27 pm Stillwater Police Officer Cory Westbrook had been dispatched about a suspicious car near Couch Park parked for several hours across the street from the playground area, according to his affidavit.
A woman had called police “because she was concerned about two men in a park without any children of their own. She stated at one point they both exited their vehicle and walked through the park/playground area toward the park’s bathroom area. Both men entered the bathroom and then exited walking back through the park/playground area,” the affidavit said.
She said that she and her two children, as well as three other kids, were present when this occurred, the affidavit said. The next morning, the Stillwater officer was contacted by the department’s crime analyst that German was classified as an aggravated sex offender required to make notification if his job or housing changed, but he did not report that he was unemployed and had his father living with him at his then residence in the 2300 block of S. Walnut, the affidavit said.
A year earlier, German had been convicted of second-degree rape of a 15-year-old girl and given a one-year jail term followed by nine years of probation, court records show.
The girl was at a friend’s house in Stillwater when German, the friend’s relative, arrived on Jan. 9, 2018, Stillwater Police Detective Inspector Greg Miller wrote in an affidavit. German “was drinking several different alcoholic beverages and using other types of intoxicants…German repeatedly sprayed an inhalant in the (girl’s) face in order to get her ‘high."” the affidavit said.
The girl told German to stop, but he continued to spray the substance in her face, the affidavit said. When she went into an unoccupied bedroom, she was followed by German and another male, who began vomiting, the affidavit said.
“Gregory German grabbed (the girl) by the throat, choked her and threw her to the floor. Gregory German continued to spray the inhalant into (her) face until she was extremely disoriented. (She) remembered Gregory German removing her shirt and pants,” the affidavit said.
“The next morning, (she) woke and discovered bruising to her throat and thighs,” and saw her panties were stained, the affidavit said. She told her mother and police were notified, the affidavit said.
“On May 16, 2018, I located and spoke with Gregory German,” who denied having sexual contact with the girl, but agreed to provide a DNA sample that an OSBI report showed German was the contributor of the stain on her panties, the affidavit said.