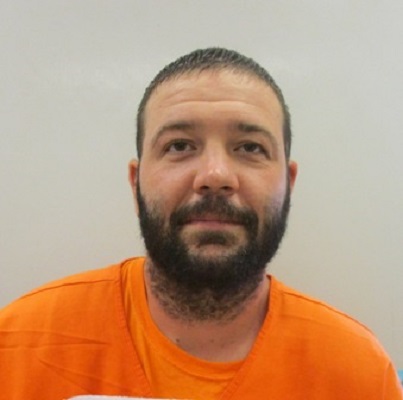 (Stillwater, Okla.) — A convicted rapist, who got out of prison three years ago, has been ordered to appear in court with an attorney on Dec. 13 on a Payne County charge of felony domestic violence at his rural Cushing residence in the 2000 block of N. Kings Highway.
Kory Alan Mitchell, 34, who was released from jail on $10,000 bail, told a judge at his Nov. 8 arraignment without a lawyer that he was guilty of the charge, court records show.
Due to his criminal record, Mitchell could be given a prison term ranging from four years to life if convicted of domestic assault and battery as a subsequent offense, court records show.
Mitchell, who is 6’4″ and weighs 228 pounds, was arrested at 1:24 am on Nov. 6 at his rural Cushing residence by Payne County Sheriff’s Deputy Daryn Zanfardino, an affidavit said.
“I explained to Mitchell that she had marks on her and that because of that I was going to have to place him in custody,” the deputy wrote in his affidavit.

According to Garfield County court records and the state Department of Corrections, Mitchell had previously been convicted of rape by instrumentation and second-degree rape in 2009 for which he was given a prison term of 2,449 days, of which he served three years and nine months, followed by probation that was revoked in 2014 when he served about a year.
In 2016, Mitchell was convicted of two counts of being a sex offender residing within 2,000 feet of a park and two counts of being a sex offender residing with a minor child, as well as one count of domestic abuse, for which he was given concurrent eight-year prison terms of which he served almost three years before he was released in August of 2019.