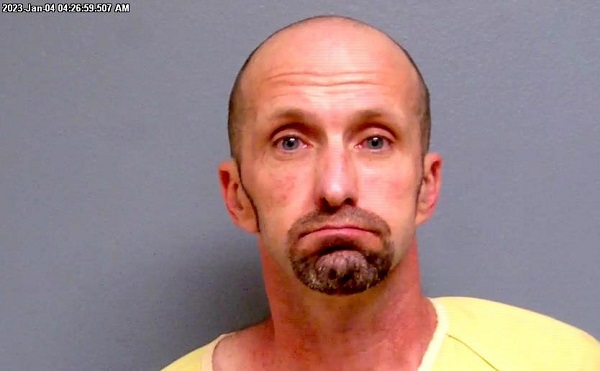 (Stillwater, Okla.) — A former Drumright man on probation for child abuse by injury in Creek County has been jailed on $20,000 bail pending his arraignment Wednesday on a Payne County charge of being a convicted felon in possession of a 12-gauge shotgun in Cushing.
If convicted, Gary Michael Fisher, 41, now of Jennings, could be given as much as a 10-year prison term and a $10,000 fine, according to the felony charge filed last week.
Fisher was arrested in the 1200 block of S. Little in Cushing on Jan. 3 at 11:30 pm after a traffic stop at 11:03 pm for driving without working taillights, an affidavit alleged.
Fisher said that the vehicle he was driving belonged to a relative’s boyfriend, Cushing Police Officer Garvis Scott Thomas alleged in an affidavit.
“In plain sight in the floorboard behind the driver and front passenger seat was what appeared to be a rifle inside a soft camouflage case. I was also able to smell the odor of marijuana coming from the vehicle,” the officer alleged in his affidavit.
Fisher’s passenger “advised he had his medical marijuana license and provided me with it,” the officer wrote in his affidavit.
The shotgun had “‘Lincoln County Sheriff’s Office’ across the right side of the barrel in big sticker letters. Dispatch checked the serial number and it had not been reported stolen,” the affidavit said.
A Lincoln County sheriff’s deputy later confirmed “the shotgun was raffled off to an employee, but the employee no longer works for the Sheriff’s Office,” the affidavit said.
Fisher and his passenger said that they did not know the shotgun was in the vehicle, the affidavit said.
Fisher said that the shotgun belonged to the vehicle’s owner, the affidavit alleged.
“While searching the vehicle, I located a purple Crown Royal bag with a blue pipe stuffed between the front passenger seat and the center console. The pipe smelled like burnt marijuana. Also located in plain sight on top of the center console was three 12-gauge shotgun shells.
“Behind the driver side seat was a clear bag with marijuana inside it. Both parties stated the marijuana and pipe was not theirs,” the affidavit alleged.
According to Creek County court records, Fisher had been convicted in 2019 of child abuse by injury in 2018 and placed on probation for five years.