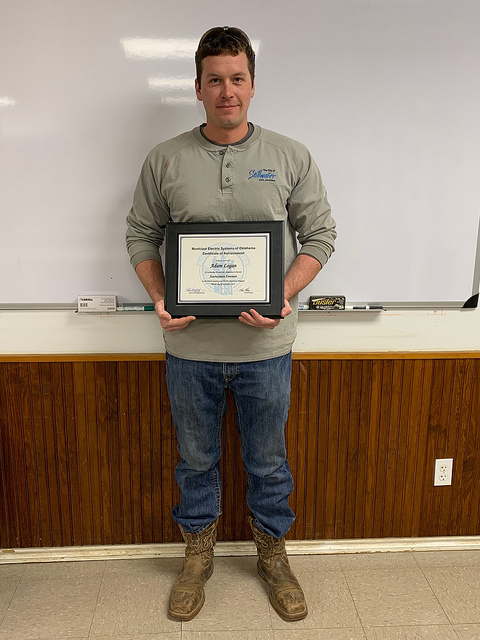 Adam Logan promoted to journeyman lineworker I
Posted on February 4, 2019

(Stillwater, Ok)   The City of Stillwater congratulates Adam Logan on his promotion to journeyman lineworker I in the Electric Utility department.

Candidates are required to take a yearly written test and a final cumulative test at the end of the four years. They must achieve a score of 85 percent or higher on each test to proceed to the next step in the program.

The Stillwater Electric Utility is one of 191 of the nation’s public power utilities to earn the Reliable Public Power Provider designation from the American Public Power Association for providing consumers with the highest degree of reliable and safe electric service.

Stillwater Man Pleads No Contest To Choking Wife
CUSHING CHAMBER OF COMMERCE, CUSHING ECONOMIC DEVELOPMENT FOUNDATION AND CITY OF CUSHING ANNOUNCE BUSINESS TOOLKIT IN RESPONSE TO THE COVID-19 OUTBREAK
City of Cushing has suspended shut-off orders for nonpayment of utilities
Stillwater Man Gets 20 Years In Prison For Murdering Man And Wounding Two Women
City of Cushing Declares State of Emergency in response to COVID-19
City of Cushing addresses issue of meals at Cushing Senior Citizens Center