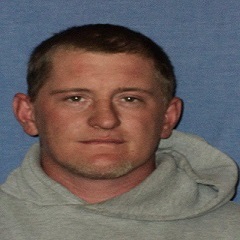 (Stillwater, Okla.) — An arrest warrant has been issued for a rural Jennings man accused of possessing a 2001 Ford F150 pickup truck and an 18′ utility trailer in Stillwater that belonged to his former employer in Creek County, court records show.

If convicted of possessing a stolen vehicle in Payne County, John David Farmer, 31, could be given as much as a 10-year prison term and a $10,000 fine.

An investigation began when a landlord observed a suspicious vehicle in the driveway of his Stillwater rent house at 2:10 p.m. on Feb. 15, Stillwater Police Officer Justin Sappington wrote in an affidavit filed in court records last week.

The landlord said that when he drove by the house to check on it, he saw a white Ford pickup in the driveway, which he thought was strange because his daughter was the only one allowed at the house, the affidavit said.

After asking his daughter about it, he went back to the house to investigate further and saw the truck with trailer attempting to back out of the driveway when he arrived, the affidavit said.

When the landlord blocked the vehicle in the driveway with his truck, “a man then jumped out of the truck and fled into the backyard,” the affidavit said.

The landlord said he was familiar with the suspect whom he knew as John Farmer, the affidavit alleged.

“Officers searched around the exterior of the house and could not locate a suspect,” the affidavit said.

The vehicle’s license tag did not match with the vehicle’s identification number, which belonged to a vehicle stolen in Creek County, the affidavit said.

The vehicle’s owner reported to Stillwater police “while he was going through his vehicle, he located an envelope addressed to John D. Farmer,” who used to work for him, the affidavit alleged.

“There was a front rack on the trailer that was now missing and also the toolbox that was on the tongue of the trailer was missing,” the owner told police, according to the affidavit. The owner said, “there were several items inside the vehicle that did not belong to him,” the affidavit said.

According to Pawnee County court records, Farmer had been given a five-year suspended sentence on Nov. 26, 2019, in a grand larceny case, on which he has been scheduled to appear in court this week on the prosecutor’s allegation that Farmer violated his probation by failing to pay costs and being charged in a new case in Tulsa County.

In Tulsa County, Farmer was charged on Feb. 18 with possessing a stolen vehicle, eluding a police officer and obstructing an officer in Tulsa on Jan. 28. Farmer remains free on $2,500 bond on that three-count case on which he has been scheduled for arraignment with an attorney on March 18.

Also in Tulsa County, a bench warrant was issued on March 6 for Farmer’s arrest for allegedly violating his five-year probation in a 2018 case of endangering others while eluding police, court records show.

According to Creek County court records, Farmer had pleaded guilty to obstructing an officer, driving on a suspended license and having unsafe lane use on July 31, 2019, for which he was given two concurrent 90-day jail terms and a $50 fine on Sept. 4, 2019.

In Pawnee County, Farmer was given two concurrent six-month suspended sentences on Nov. 26, 2019, for petty larceny and receiving stolen property, both on July 27, 2019, court records show.