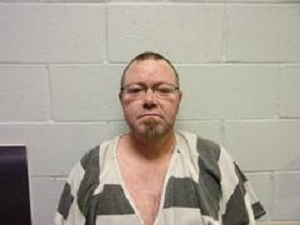 STROUD, Okla. – The person of interest in a Stroud double homicide has been charged in connection with the murders of Pauletta Pittman, 63, and Mark Pittman, 65. The Pittmans were discovered deceased in their Stroud home yesterday morning.

Shawn Pittman, 39, is now facing two charges of Murder in the First Degree in the death of his parents. Shawn Pittman was taken into custody by the Stroud Police Department yesterday after 5 p.m. At that time, he was transported to the Stroud jail on DUI charges. Later that evening, he was booked into the Lincoln County jail, where he remains.

The investigation began when Pauletta didn’t show up for work yesterday morning and a coworker contacted the police department to check on her welfare. After the Pittmans were discovered, officers noted that her mini-van was also missing and they could not contact their son, Shawn, who was living with them at the time. This made Shawn a person of interest in their murder case.

A description of the mini-van, as well as Shawn’s, were released to the public in an effort to locate his whereabouts. Within a few hours, investigators received a call that a Sienna mini-van matching the description of the one owned by Pauletta was getting gas at a station in Stroud. A second call reported that the mini-van had left the gas station. Based on the information received from the callers, the Stroud Police Department was able to locate the vehicle diving Westbound on 4th Street and pulled it over, at which point they took Shawn into custody for DUI.

The investigation into the Pittman murders is ongoing.