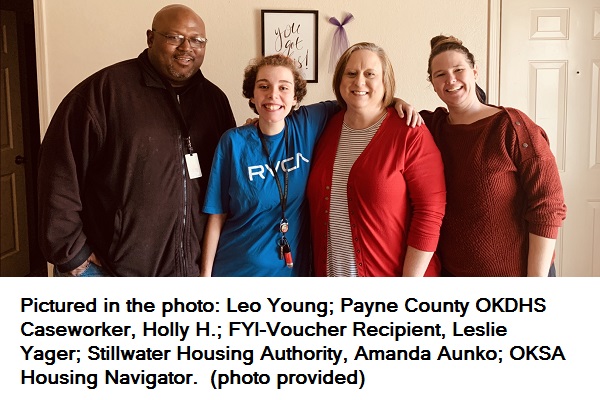 (Stillwater, Okla) — The Stillwater Housing Authority (SHA) has entered into a partnership agreement with Oklahoma Department of Human Services (OKDHS) in partnership with the U.S. Department of Housing and Urban Development (HUD). HUD’s new Foster Youth to Independence (FYI) Initiative provides housing vouchers to local housing authorities to prevent and end homelessness among young adults who’ve recently left the foster care system. The initiative focuses on increasing housing options for former foster youth under the age of 24, that are homeless or at risk of homelessness.

“Ensuring young adults leaving foster care have viable housing options, like those created through the FYI partnership, is essential to them meeting every other goal of independence. We can all imagine how hard it would be to focus on work or school when you don’t have a stable place to sleep at night.” Said OKSA Housing Navigator, Amanda Aunko.

Stillwater Housing Authority & Payne County DHS signed memorandums of understanding (MOU) last fall with the first FYI-voucher recipient moving into their apartment in January. Prior to receiving the FYI-Voucher Holly was a former foster youth that was couch hopping every night. As a parent to one child with another on the way she desired to overcome her current situation and find a stable home for her child to return to.

Through community partnerships with Oklahoma Successful Adulthood (OKSA), The First Baptist Church in Perkins and other local service providers Holly will receive supports in the areas of tenant rights and responsibilities, basic life skills, and job preparation to ensure she successfully transitions to independent living.

When asked what’s been most helpful to her as a FYI-Voucher recipient; Holly stated “Besides the voucher itself, the housing and utility deposits I received through Yes I Can! [OKSA’s transition program for older youth] has helped me, really I don’t know just getting the opportunity to show other kids that life’s not all that bad after DHS. And the bed I got, that was awesome!”

Candy Deckard and ladies from the First Baptist Church in Perkins welcomed Holly to the neighborhood with a housewarming party in which she received housing needs and furniture to decorate her home.

“Holly now has a place to really call home. The best part of all of this, she now has met people in the community that have become natural supports to her, which is even bigger than what this program does. Foster children are the bravest children I have ever met. Worrying about where they are going to lay their head at night is something they should not have to think about,” said Stillwater Housing Authority HCV Coordinator, Leslie Yager.

Holly plans to repay the generosity that was shown to her by helping other youth that have left foster care that are in need.

The population eligible to apply for assistance through the FYI partnership are those young adults being certified by OKDHS and meeting the following conditions:
• Has attained at least 18 years and no more than 24 years of age
• Left foster care, or will leave foster care within 90 days, in accordance with a transition plan described in section 475(5)(H) of the Social Security Act at age 16 or older; and
• Is homeless or at risk of becoming homeless