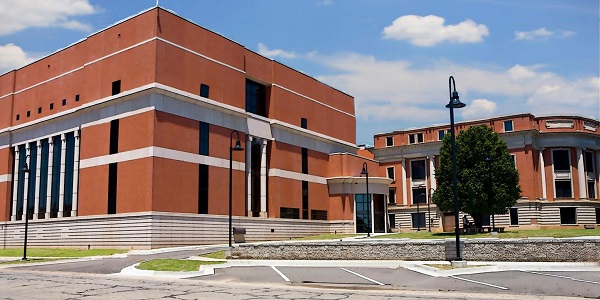 Payne County Jail (file photo)
Posted on September 3, 2021
By Patti Weaver
(Stillwater, Okla.) — A 62-year-old Cushing man, who allegedly told Payne County Sheriff’s Deputy Donato Lomboy that “he was too old to be doing this,” has been charged with stealing copper from Northrup Metals while the business at 322 W. Grandstaff Road was closed at about 3 am on Aug. 30.
Terry Lynn Fick, a former Agra resident on probation for possessing methamphetamine in 2013 and also in 2014 in Lincoln County, was ordered held in the Payne County Jail on $3,500 bail pending his arraignment on Sept. 7, court records show.
The Payne County deputy had received a call at 1:36 am on Aug. 30 of “a suspicious vehicle driving in the area of Grandstaff and Depot in Cushing,” his affidavit said.
After Fick allegedly failed to use a turn signal, the deputy conducted a traffic stop at Grandstaff and Highway 18, his affidavit said.
While Fick was looking for his license, “I shined my flashlight into the passenger and cargo area of the vehicle,” and saw that “the rear seats were folded down and the rear cargo area was empty except for a piece of plywood that was laying flat,” the deputy wrote in his affidavit.
“I gave Terry a verbal warning for not using his turn signal and told him that he was free to go,” the deputy wrote in his affidavit.
About an hour and half later at 3:12 am, the deputy alleged in an affidavit, “I was driving east on Grandstaff from Depot and I noticed Terry’s vehicle backed up into the east side of Northrup Metals located at 322 W. Grandstaff, which is closed for business at this time.
“I turned on my takedown and emergency lights and could see Terry in the driver’s seat of the vehicle. I also noticed that there appeared to be a large AC unit and other items in the cargo area of the vehicle. I asked Terry what he was doing and Terry stated he was getting some stuff.
“I asked Terry what kind of stuff he was getting and he stated that he was getting some brass pieces and other metal items. I asked Terry if he knew who owned that property and he stated that he did not.
“Terry stated that he got the items out of the trailer just east of the business located behind the fence and no trespassing sign on the property. I asked Terry if he was sure that he got them out of the trailer because I did not see any tracks leading to the trailer.
“Terry then stated that he wasn’t going to give me any trouble and that he was going to be honest with me because I already ‘got him.’ Terry then stated that he entered the property through the open gate and walked up to the metal building located behind the fence on the property just northwest of the gate.
“Terry stated that the door to the building was open so he walked in and took the items and then carried them back to his vehicle and loaded them up,” the deputy alleged in his affidavit.
After Fick was arrested “As I placed Terry into the backseat of my patrol vehicle, he stated that everything that was in the cargo area was stuff that he had taken from the building. Terry then stated that he was too old to be doing this and he just wanted to be honest with me about what happened.
“Terry stated that the vehicle had come out of park and rolled back and hit the pipe on the fence,” the deputy alleged in his affidavit.
At about 4:07 am, a wrecker driver pulled the vehicle up to the wrecker and hooked it up to the winch to prevent it from rolling back while the deputy got items out of the back of it, the affidavit alleged.
“The following items were collected out of the back of the vehicle and placed into evidence: one large broken window AC unit, one small smashed window AC unit, one copper/aluminum refrigerant pipe, one large metal pipe, one plastic five-gallon bucket full of copper and other miscellaneous metal pieces, and one black plastic crate full of copper and other miscellaneous metal pieces,” the affidavit alleged.
Fick had been placed on seven years of probation except 90 days in jail on Jan. 30, 2015, for possessing methamphetamine in 2013 in a drug case investigated by the Iowa Tribe Police Department, and for the same drug crime in 2014 that was investigated by the Chandler Police Department, Lincoln County court records show.
***