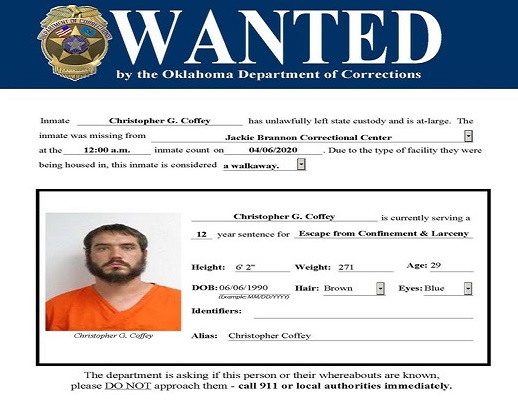 (MCALESTER, Okla.) – Oklahoma Department of Corrections agents and Jackie Brannon Correctional Center security staff are searching for the last of five inmates who walked away late Sunday from the minimum-security prison for men.

Christopher G. Coffey, 29, was one of the inmates who left the facility, and he remains outstanding. He is described as white, about 6-feet 2-inches tall, weighing about 270 pounds, with brown hair and blue eyes. He was serving a 12-year sentence for escape from confinement and larceny.

Anyone with information on Coffey’s location should call 911 or ODOC’s escapee hotline at (866) 363-1119. Citizens can also email information to warrants@doc.ok.gov. All calls and emails are confidential.

Initial investigation indicates several of the walkaways escaped by breaking out a second-floor window of the prison.

Three of the group then stole a car from a woman near the facility. McAlester police arrested those three later after they crashed the vehicle. Police found the fourth inmate near the crash site shortly afterward and arrested him.

Due to COVID-19, each will be quarantined at Lexington Assessment & Reception Center in Lexington for two weeks.

ODOC will also submit information for charges against the men for escaping from confinement.

JBCC is a converted former hospital dating back to 1927.