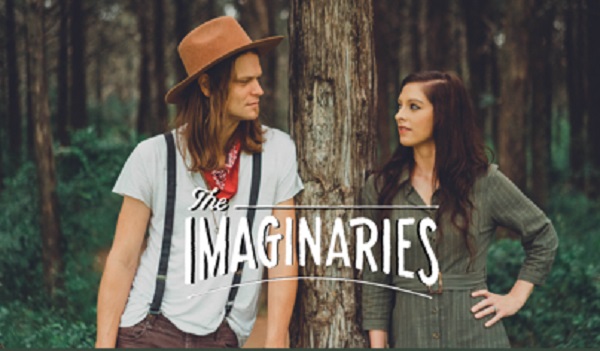 *Editor’s note:  The Imaginaries will be on HOME at 1600 KUSH radio, Wednesday, Dec. 1st for an in studio interview and performance.  They will also be performing at The Dunkin Theatre in Cushing’s Broadway District on Dec. 11th.

Oklahoma’s favorite Americana husband / wife duo, The Imaginaries, Shane Henry (guitar, vocals) and Maggie McClure (keys, piano, vocals), have partnered with the Chickasha Economic Development Council for the release of their festive new original holiday song “Christmas Town” out now – Listen HERE.   The song and upcoming video will help celebrate the Chickasha Festival Of Light, named by Forbes Magazine  and USA Today as one of the best light displays in the United States.  Click HERE to see a peak of the festivities including the iconic 40-foot giant leg lamp.

“Christmas Town” was co-written by Grammy-award winning songwriter Jeff Silbar, who may be best known for writing Bette Midler’s classic “Wind Beneath My Wings,” along with Maggie McClure and Shane Henry.  It was recorded at Cardinal Song in OKC and Windjammer Studios in Norman, OK.  The cover art was designed by famed Disney animator James Lopez.

The Chickasha Festival Of Light is a free event taking place from November 20 – December 31 and will transform Shannon Springs Park’s 43 acres into a magnificent walk and drive thru light display.  The Festival expands this year to beautiful Downtown Chickasha with “December at the Depot” beginning Friday, December 3..  There will be new attractions, pop up shops, food trucks, a shuttle that transports passengers out to Shannon Springs Park to avoid the line, and a chance to get your picture taken with Santa, the Downtown Christmas Tree, or the leg lamp.

And on December 4, The Imaginaries will participate in the annual Chickasha Christmas Parade down Main Street, showcasing around 40 floats from businesses and community groups. The Parade starts at 7:00pm and will be followed by a special performance by The Imaginaries as well as a screening of the “Christmas Town” Music video at the Chickasha Community Theatre (Historic Washita Theatre) at 8:00pm.  Tickets are only $10 and 100% of the proceeds will benefit the Chickasha Soup Kitchen and Life Skills Institute – Purchase HERE.

Last year, The Imaginaries partnered with the Chickasha EDC to release their original holiday song and video for “Hometown Christmas,”  the title track off their 2020 album by the same name, Hometown Christmas (listen HERE).  The album features 13 tracks of originals and some of the duo’s holiday favorites.

“After the huge success of last year’s partnership, we were excited to collaborate again with The Imaginaries this year,” says Jim Cowan, Chickasha Economic Development Director. “Their song captures all that the holiday season brings to Chickasha and makes us truly feel like ‘Christmas Town.’ They will always be a local favorite during the holidays.”

More about The Imaginaries…

Songs include “Revival,” a spiritual swampy roots song about finding hope and salvation, received radio play at WMOT, WMHB, WXNZ, WTMD, WCBE, KAFM, WCLX, KSMF, WERU, KOSU, KKFI, WVIA, WMMT, KZUM, WVMO, KHNS, and more.  American Songwriter says “’Revival’ is a song of strong compositional form, smart with word play and rhyme scheme, and built for an audience anxious for a good call-and-response or catchy refrain to (eventually) belt at a live show..”  “It’s upbeat and bluesy with smart lyrics and smarter composition…there are shades of The Civil Wars, with perfectly matched harmonies and exquisite chemistry,” says Three Chords.  The video / short film received a lot of attention on the film festival circuit with its O Brother, Where Art Thou? meets Bonnie and Clyde theme.  Watch it HERE.

The Imaginaries also released and premiered the video for “Blue Sky” with a special DittyTV interview and performance, watch it HERE, “Walking On A Wire,” with the stunning video shot in the dunes of Little Sahara State Park in Waynoka, OK and Gloss Mountain State Park in Fairview, OK, watch it HERE, and “Thinking ‘Bout You,” a sincere acoustic-driven song about missing someone you care about but don’t get to be with because of distance, watch the video HERE. They recently released “You Already Know” watch the video HERE, a tender song they wrote for each other and performed for the first time on their wedding day almost ten years ago.  The song was featured in the Hallmark Movies & Mysteries  movie “Redemption In Cherry Springs” starring Rochelle Aytes, Keith Robinson, Frankie Faison.