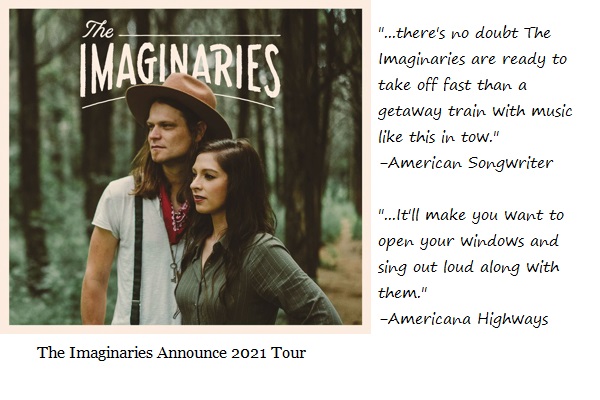 Norman, OK (August 9, 2021) – Oklahoma husband and wife duo The Imaginaries’ Maggie McClure (piano, keyboard, vocals) and Shane Henry (guitar, vocals) are finally set to tour in support of their debut album, The Imaginaries which came out March 26 through ONErpm.

“We are so excited to finally get back on the road as things start to open back up,” says the duo. “We can’t wait to perform our new songs live and in front of an audience at some of our favorite venues and places across the U.S.!”

Their most recent single “Revival,” a spiritual swampy roots song about finding hope and salvation, received radio play at WMOT, WMHB, WXNZ, WTMD, WCBE, KAFM, WCLX, KSMF, WERU, KOSU, KKFI, WVIA, WMMT, KZUM, WVMO, KHNS, and more.  American Songwriter says “’Revival’ is a song of strong compositional form, smart with word play and rhyme scheme, and built for an audience anxious for a good call-and-response or catchy refrain to (eventually) belt at a live show..”  “It’s upbeat and bluesy with smart lyrics and smarter composition…there are shades of The Civil Wars, with perfectly matched harmonies and exquisite chemistry,” says Three Chords.  The video / short film has received a lot of attention on the film festival circuit with its O Brother, Where Art Thou? meets Bonnie and Clyde theme.  Watch it HERE.

In addition to “Revival,” The Imaginaries released and premiered the video for “Blue Sky” with a special DittyTV interview and performance, watch it HERE.  They also released “Walking On A Wire,” a song written about facing obstacles head on and pushing through to overcome them along with the stunning video shot in the dunes of Little Sahara State Park in Waynoka, OK and Gloss Mountain State Park in Fairview, OK – watch it HERE. “Thinking ‘Bout You” is a sincere acoustic-driven song about missing someone you care about but don’t get to be with because of distance – watch the video HERE.

The Imaginaries recently wrapped filming A Cowgirl’s Song, a country music driven feature film and fourth installment in the popular Cowgirls ‘N Angels series, starring the legendary Cheryl Ladd (Charlie’s Angels), Savannah Lee May (Julie And The Phantoms, The Secret Lives Of Cheerleaders) and Darci Lynne Farmer (America’s Got Talent season 12 winner), as well as The Imaginaries, who are co-producing, co-starring in, music supervising, scoring, and co-writing the soundtrack to the film.

The duo will be on the road playing special album release shows beginning August 20 at Maggie’s Music Box in Jenks, Oklahoma and will play the legendary Hotel Café In LA on September 30, State Fair Of Texas on October 5, and Muscle Shoals Songwriter Festival November 5, among other dates. All tour dates are listed below.