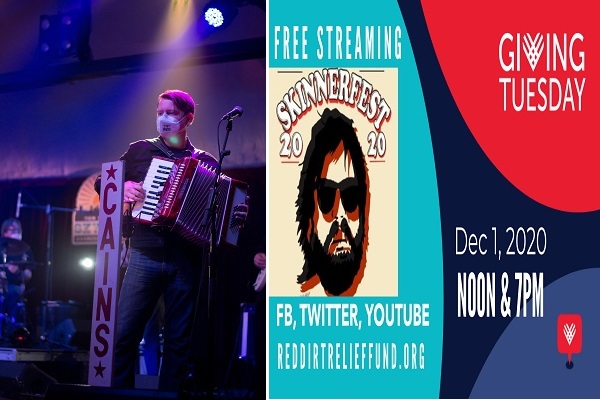 Tulsa, Okla.—In the spirit of Giving Tuesday, the largest international day of giving, Red Dirt Relief Fund will stream a free encore of its Skinnerfest 2020 virtual music festival on December 1st as a way of thanking fans and donors for their support in this especially difficult year.

Since March, Red Dirt Relief Fund has granted $145,500 to 582 out-of-work Oklahoma music professionals due to gig cancellations and venue closures. Data released by the Brookings Institution indicates Oklahoma lost more than 19,000 creative industry jobs and $606 million dollars in sales of this industry’s goods and services between April 1st and July 31st of this year. Contributions to the RDRF’s COVID grant program can be made at reddirtrelieffund.org/donate or on Facebook and Instagram. Anyone who makes a donation of $20 or more on #GivingTuesday will receive a Red Dirt Relief Fund bandana while supplies last.

According to Red Dirt Relief Fund Executive Director Katie Dale, “This year has been devastating for artists and other music professionals statewide. Normally, we’d ask them to perform live on their social media sites on “Giving Tunesday” to thank donors who support this cause. But we know they need to collect all the virtual tips, music and merch sales they can to survive. We’re grateful to our partners for making it possible to share this stream worldwide for free.”

Skinnerfest was made possible with program support from Kirkpatrick Foundation and by sponsors including the Oklahoma Film & Music Office, Tulsa Dental Center, The Collaborative, White Claw/LDF and Broken Arrow Brewing Company.

To stream the show, which runs about an hour and a half in length, visit any of these sites at 12:00pm or 7:00pm CST on Tuesday, December 1st:

#GivingTuesday in an international movement to care for and empower one another. Celebrated on the Tuesday following Thanksgiving (in the U.S.) and the widely recognized shopping events Black Friday and Cyber Monday, #GivingTuesday harnesses the potential of social media and the generosity of people around the world to bring about real change in their communities; it provides a platform for them to encourage the donation of time, resources and talents to address local challenges. It also brings together the collective power of a unique blend of partners— nonprofits, civic organizations, businesses and corporations, as well as families and individuals—to encourage and amplify small acts of kindness.