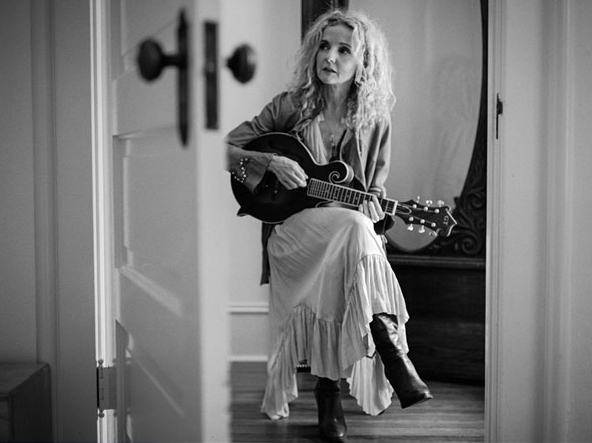 (Oklahoma City, Okla) — Patty Griffin is among the most consequential singer-songwriters of her generation. Over the course of two decades, the GRAMMY® Award winner – and seven-time nominee – has crafted nine classic studio albums and two live collections, that prompted the New York Times to hail her for “[writing] cameo-carved songs that create complete emotional portraits of specific people…(her) songs have independent lives that continue in your head when the music ends.”

The Austin, TX-based singer and songwriter made an immediate impact with her 1996 debut, Living With Ghosts, and its 1998 follow-up, Flaming Red – both now considered seminal works of modern folk
and Americana. Since then, Griffin’s diverse body of work spans such classic LPs as 2002’s GRAMMY® Award- nominated 1000 Kisses – later ranked #15 on Paste’s “The 50 Best Albums of the Decade (2000-2009),” — to 2007’s Children Running Through, honored by the Americana Music Association with two Americana Honors & Awards including “Artist of the Year” and “Album of the Year.” To date, Griffin has received seven total nominations from the Americana Music Association, affirming her as one of the far-reaching genre’s leading proponents. 2011’s Downtown Church – which blends traditional gospel favorites with Griffin’s own spiritually questioning material – debuted at #1 on both Billboard’s “Folk Albums” and “Christian Albums” charts before winning 2011’s “Best Traditional Gospel Album” GRAMMY® Award, Griffin’s first solo GRAMMY® triumph among seven total career nominations. Griffin’s most recent LP, 2015’s Servant Of Love, marked the first release on her own PGM Recordings label via Thirty Tigers. Applauded by The Guardian as “bravely experimental,” the collection saw Griffin earn still another GRAMMY® Award nomination, this time in the “Best Folk Album” category.

Oklahoma’s own John Fullbright is a GRAMMY® Award nominated Americana artist and will open the
evening.

This show is presented by Kessler Presents, The Blue Door, and The Auditorium at The Douglass.
Tickets for Patty Griffin with John Fullbright, September 28, 2019 are on sale now at
auditoriumatdouglass.com. Tickets start at $35. Doors open 7:00pm, show starts at 8:00pm.

ABOUT KESSLER PRESENTS:
Kessler Presents is an independent Texas-based promoter, presenting the best of emerging and established artists in over 400 events annually throughout the region, predominantly in our proprietary venues, The Kessler Theater (Dallas) and The Heights Theater (Houston), as well as with partner facilities in Austin. By embodying both history and state-of-the-art capabilities, we deliver an unrivaled artist-patron experience, earning Kessler Presents a reputation as one of the best independent operators in the country.

ABOUT THE BLUE DOOR:
The Blue Door has been America’s most revered listening room for over 25 years, showcasing both legacy artists such as Jimmy Webb, Peter Asher, Ramblin&#39; Jack Elliott, Arlo Guthrie, Eric Anderson and David Amram, as well as helping to launch the careers of John Fullbright and Parker Millsap. While it showcases many folk and Americana artists, founder Greg Johnson says, “The Blue Door really just a venue for songs.&quot; That could mean Dave Alvin rocking out, or the quieter reflections of Eliza Gilkyson or Patty Griffin. It’s small, BYOB and exists “for the sake of the song.”