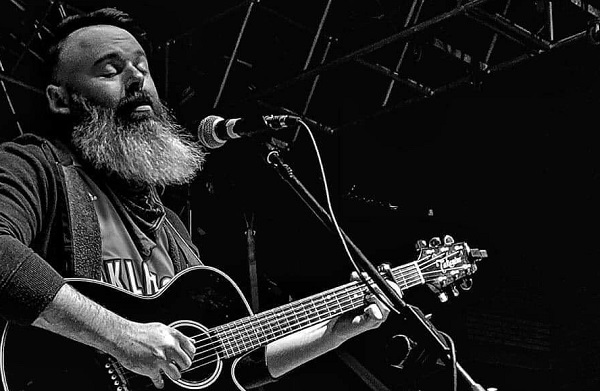 (Oklahoma City, Okla) — Adam Miller was born and raised in Oklahoma, grew up in Enid and later after adventuring out of state for close to a decade, settled into Oklahoma City. Miller relocated to Portland, Oregon for those years outside of his home state, where his need to explore and experience different ways of life was placated for a while, until the calling of home pulled him back to the land of red dirt. These deeply planted Oklahoma roots definitely shine through on his soon to be released EP, My Darling Oklahoma. This collection of songs pays homage to those very roots that run so deep inside of him.

Miller has been playing music most of his life, encouraged and prodded along by his grandmother and parents. He credits his Grandmother as being a big catalyst, buying him his first little keyboard. Miller said that as an artist in her own right she taught him to be passionate but to be humble.

Influenced by various artists along the way, including John Prine, Leo Kottkey, Robert Earl Keen, and Jackson Browne, Miller has a love of many different types of music and music makers.

Miller has found his musical home in various places around the metro area over the years, but has a special fondness for the now defunct Galileo bar in the Paseo from the early days of cutting his teeth in the scene, when local legend Bob Moore was urging him to pursue it more and explore his musical realms.

More recently Miller has embraced the Seven Day Rebellion at JJ’s Alley in Bricktown as one of his home bases, where he finds the community of musicians and family spirit soothing and refreshing after spending lots of rather lonesome nights gigging as a solo artist.

My Darling Oklahoma is a 6 song EP that each pulls a thread through to create a tapestry of sounds and imagery of Miller’s roots. All the songs were written and composed by Miller, with David Short on fiddle, Nathan Lanier on dobro, and Johnny Carlton on bass for one of the songs. It was produced by Kyle Reid at Naptime Studio, and mastered by Creaky Floor Studio. Graphic design by Erin Taylor.

Miller’s great grandfather homesteaded on farmland in Woodward, later owned by his grandfather. His mother was born and raised on the farm. While he himself was born and raised in Enid, Miller has nostalgic memories of growing up visiting the farm and his family out in the countryside. This family farm plays a vital and central role in the creation of the EP. Most notably in the imagery and art work, but also in the inspiration for much of the songwriting.

“So, it’s just a really awesome place in my memory and a very sacred place, even though it’s not a place to go to anymore. That farm sold, which is fine. That’s the evolution which connects to the song Fence Posts,” explained Miller.

The imagery and design of the album all revolves around the family farm and it’s members. You’ll see pieces of an actual ledger that was used as a cash journal from 1975 to 1985, showing who his grandfather paid for various reasons. Both Miller’s father and uncle’s names are displayed in the ledger, having been paid to harvest. When the ledger fell into Miller’s hands, it also held various pictures of the farm and he used those pictures in the artwork, along with his grandmother’s driver’s license. All of these pieces of the family legacy paint a picture and sets the whole tone for this EP. It’s about simpler times, with genuine and authentic themes, wrapped up in the love of Oklahoma.

In fact, the title track, My Darling Oklahoma is Miller’s love song to the state.

“It is literally just this love song for the place. Even if you are here and you remain here and live here, sometimes you still want to go find the world far from here and explore,” explained Miller of the song. “In the first lines, ‘I’m giving this one to you my darling Oklahoma, and I know my love comes far away. Please don’t hold it against me if I long to see me a world far from you‘ meaning, I know where you are, and I love this place, but I’m still going to go explore this world.”

The song has an almost hauntingly beautiful tune, created in part by the poignant fiddle playing and the expressive vocals. Miller’s voice has that rare quality of being both honey smooth and slightly rough around the edges which gives it a depth of emotion. This tune has plenty of Oklahoma symbolism woven through it, while still feeling genuine and true and not overly cliched.

Miller pays a sort of homage to red dirt legend Bob Childers’ with The Songwriter. Although Miller never met Childers, through friends and musical mentors he still found himself at the wake held at the Blue Door in honor of Childers days after his death. Miller said it was his first real glimpse into the Oklahoma music scene; the raw, vulnerable, family aspect of the scene where everyone came together to celebrate the life and musical legacy of someone from their tribe.

The Songwriter definitely plays out the story of the quintessential Oklahoma troubadour and what it really means to be one of these traveling music makers. Miller captures it with a raw elegance not only in the lyrics and vocals, but also in the simple style and the beauty of the sound of the tune as well.

Lullaby for Alexa doesn’t have quite the extensive backstory to it, being “just a lullaby for a girl with trouble finding sleep,” that Miller wrote about a decade ago. It’s a delicate and delightful song, filled with engaging instrumentals and sincere vocals, making it fit perfectly in with this collection of songs.

The Most Beautiful girl is a quirky and lighthearted love song about the most beautiful girl in the world, who of course is from Oklahoma. It’s got a bit of a faster pace than the previous songs, filled with a kind of burning fire in both the instrumentals and some fancy vocal workings.

Freedoms Failure is about as political as Miller will get in a song, and almost didn’t make the cut for this EP.

“It is a weird deal where I almost didn’t put it on it. The rest of the songs is full of a lot of cool stuff that I’m kind of romanticizing about in Oklahoma. But I also want to be real in that I don’t really appreciate some of the government here,” explained Miller. “I’m not going to ignore the fact that there are things that we still have to work on in our state and that’s what this song is about.”
The tune is well done and clearly conveys Miller’s thoughts of what those things are that still need some smoothing out in Oklahoma. It’s catchy and set to a jovial tune which gives it a lighthearted vibe, taking some of the edge off of the seriousness of the subject without watering it down at the same time.
The EP will be released on November 30th on all digital platforms. You can also pick up a copy at the album release show.
Miller has chosen the most perfect place to have his album release show, the infamous Blue Door listening room. The show will be held Saturday November 30. That stage has held so much love for Oklahoma, that it is only fitting that it be where My Darling Oklahoma is debuted. Tickets can be found online at bluedoorokc.com.
Miller is also looking forward to being a part of the 2020 Mile Zero Fest in Key West early next year. You can find more information about the festival at Mile0fest.com.
Be sure to look up Miller’s social media accounts and follow him for show listings and more information.
**Editor’s note:  Adam Miller will be a guest on HOME w/the KUSH Girls, Thursday, Nov. 21st @ 9 am.**