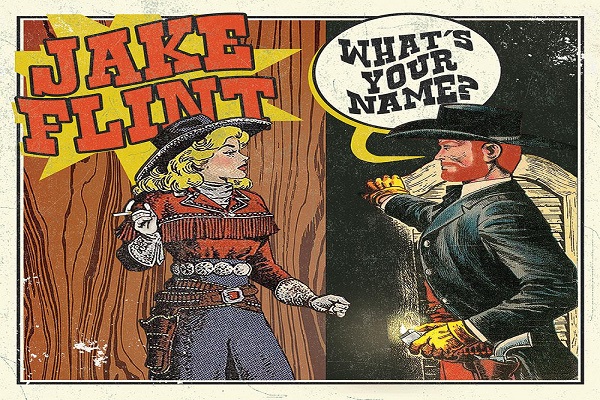 Tulsa-based singer-songwriter Jake Flint has been steadily paying his dues for the past few years on the live performance circuit in the Red Dirt music scene of Oklahoma and Texas with his easy going style, quick wit and exceptional performance talents which have gained him a growing legion of supporters at radio and with its listeners.

His previous singles “Cowtown” and “Long Road Back Home” (included on ‘Jake Flint’), his 2017 album, ‘I’m Not Okay,” and the follow-up ‘Live and Not OK at Cain’s Ballroom’ set the stage for this next phase of his recording career, and influential radio programmers are paying attention.

“‘What’s Your Name’ is the new record, yes I said record, from Jake Flint. From the downbeat and the sound of the nod to surf guitar, you know this is gonna be fun. The sound is not only fun, it takes you somewhere that most of us have been before, meeting someone new. Jake is not just presenting the man’s side of this but also the ladies side. ‘I’ll give you a light if you tell me your name.’ Hell, we’ve all been there. The lyrics are flirty and fun and surprisingly real. That’s Jake Flint. Jake is capable of writing truth and often writes from his own experience knowing that we can relate to those truths. He is real. Tom Waits once said that ‘all good songs have a time, a place, and people.’ Jake, on purpose or not, follows this rule in ‘What’s Your Name.’ Jake Flint, as this record says, has his eyes on the stars and his feet on the ground and to me that’s Jake Flint because that’s his name.”

“What’s Your Name” is available for radio programmers to download at CD Tex.

‘Jake Flint’ is available for streaming or purchase at all major digital retailers at this link:

For more information about Jake Flint, visit his website at: www.jakeflintmusic.com

Jake Flint is a Red Dirt singer/songwriter who resides in rural Mounds, Oklahoma. Jake was born in 1985 and raised in the oilfield boom town of Holdenville in southeastern Oklahoma, the son of a wildcat oilman and a hard-working mother of two. He was transplanted to Tulsa, Oklahoma where Jake says he was always the “outcast country kid in the city.” Jake’s father was a music lover and raised him on John Denver, James Taylor and Dire Straits along with various Texas singer/songwriters such as Guy Clark, Townes Van Zandt, Steve Earle, John Prine and others. Because of his shortcomings at fitting in as a city kid, Jake tagged along with his older sister’s crowd and got a hefty dose of 90s grunge rock from Nirvana, Pearl Jam, and Foo Fighters. He was also exposed to Dave Matthews Band, John Mayer, Guster, David Grey or whatever else he heard coming from his sister’s room.

Jake’s first introduction to playing music was a result of his father having been diagnosed with A.L.S. or Lou Gherig’s Disease and was not able to physically provide interaction to his son. Concerned about not being able to participate with Jake in sports, his father commissioned a couple of his lifelong best friends to teach Jake to play guitar and take him to regional bluegrass festivals. Jake discovered a love of bluegrass music which soon transitioned into a love for jam bands such as Phish, String Cheese Incident, and Bela Fleck & The Flecktones. It was at this time that Jake was inspired to write his own music. Jake’s next musical phase was his discovery of songwriters born out of the Texas and Oklahoma music scene past and present; Tom Skinner, Bob Childers, Boland, Canada, McClure, Chris Knight among countless others. This is where Jake found himself, his musical inspiration, and launched his own singer/songwriting career.

Jake wrote and recorded his first record ‘I’m Not Okay’ which produced by Mike McClure in the Boohatch Studio, in Ada, Oklahoma and released in 2017. The record is similar in musical stylings as the Great Divide and Cross Canadian Ragweed as Jake intended. With the help of Mike McClure and his band mate Taylor Reed, along with Jon Knudson from Whiskey Myers, and Jake’s good friend Cody Woody, they performed all the instrumentation on the record. His 2018 follow-up was ‘Live and Not OK at Cain’s Ballroom.’

Jake admits that at too young of an age he experienced many of life’s highs and lows including losing his father. He claims he’s floated through life loving, hating, gaining, losing, experimenting, witnessing, missioning, sinning, breaking the law, paying the consequences while openly and candidly writing about it all.

Jake plays solo acoustical performances and with his band at venues all over Oklahoma, Texas, and surrounding states.