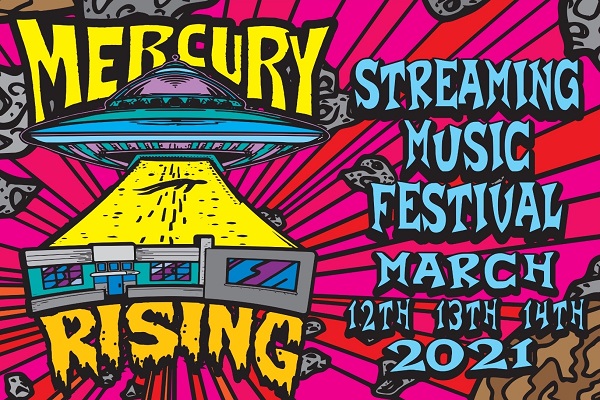 Posted on March 2, 2021
Media Release
What:
Mercury Lounge, in partnership with Jim Beam, Grand Casino, Kessler Presents and the Oklahoma Film & Music Office, presents three days of music from nationally recognized headlining artists and regional favorites, filmed with multiple cameras and polished off with top level audio production. The performances are a mix of new performance material and footage captured during the early stages of the ongoing Covid 19 pandemic, which ground the touring industry to a halt in March of 2020. The festival will feature social media driven takeovers from artists all over the country and a music video showcase from filmmaker, Sterlin Harjo, with a question and answer session. The streaming event will happen in tandem with a run of limited capacity, distanced live shows at Mercury Lounge as a celebration of the dive bar and music venue’s sixteenth birthday.
Who: Some key performances for the streaming festival include The Red Dirt Rangers, John Fullbright, Mike McClure, Jamie Lin Wilson, Joshua Ray Walker, Scott H Biram, Keeng Cut, Carter Sampson, Vandoliers, The Vampire Youth, Golden Ones, Casii Stephan, Hillbilly Casino and many, many more. Full lineup to roll out over the two weeks leading up to the festival.
The live events at Mercury Lounge will feature performances from the Paul Benjaman Band, BC & The Big Rig, Pilgrim with John Fullbright, Cassie Latshaw, a return of the Fire Fridays residency with a set from hip hop artist Parris Chariz and capped off with a free headlining set from Dallas based Cowpunk hero’s, Vandoliers.
Why:
As the Covid 19 Pandemic shuttered venues and killed touring routes around the nation, Mercury Lounge went to work, using their dedicated social media platform to deliver live shows to a national audience, streamed safely from a closed bar. As the situation continued, they used innovation and a true DIY mentality to produce a run of high definition pay per view shows, featuring nationally recognized artists, and sold through a digital ticked platform. Those performances, coupled with newly captured footage, social media takeovers and music related showcases, will now be shown, for free via a social media delivery, to a worldwide audience, as a thank you from the artists and venue for the support of music fans all over. The run of shows will also act as a fundraiser to help Mercury Lounge continue to offer free daily live shows from celebrated and emerging Oklahoma based artists.
Where:
The digital shows can be found across multiple social media platforms and pages, with several of the sponsored partners acting as satellite “stages”. The digital shows will go live directly from partener Facebook, Twitter and YouTube accounts with a full schedule lineup and times to be released soon.
The in person live shows will take place at Mercury Lounge, in Tulsa, OK. Mercury Lounge is an American dive bar with a focus on roots music and the communities that form around it. They are committed to providing a safe space for the music fan, a professional experience for the working musician and a fast drink at a fair price. In November of 2020, Mercury Lounge was honored with a grant from the Live Music Society for their ongoing work through the Covid 19 Pandemic and their commitment to live music, artist support and community focus.
When:
Paul Benjaman kicks everything off Thursday, 3/11 at 8PM, with events both online and in person running through Sunday, 3/14.
Main Event Link For Upcoming Info: http://fb.me/e/7BYxZTC6o