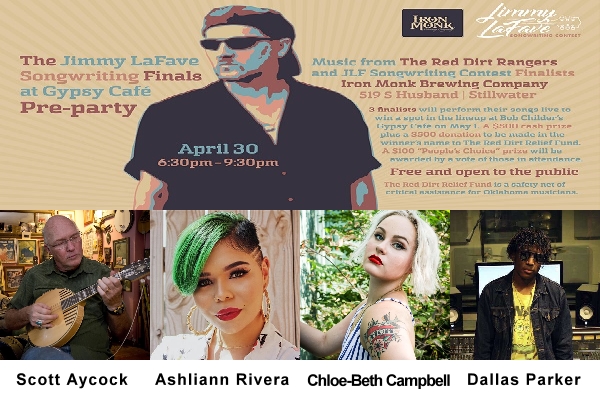 (Stillwater, Okla.) “Abilities” by Dallas Parker, “Angels Lullaby” by Ashliann Rivera, “Breathless” by Chloe-Beth Campbell and “Hollyhocks and Morning Glories” by Scott Aycock were selected from 74 entries as finalists in the second annual Jimmy LaFave Songwriting Contest. Finalists will play their songs before a live audience at the Gypsy Café Preparty hosted by the Red Dirt Rangers on April 30th from 6:30-9:30pm at Iron Monk Brewing at 519 S. Husband, Stillwater. At stake for the finalists is the chance to secure a spot in the lineup at Bob Childers’ Gypsy Café on May 1, a $500 cash prize plus a $500 donation made in the winner’s name to the Red Dirt Relief Fund. A $100 “People’s Choice” prize will also be awarded by a vote of those in attendance. This event is free and open to the public.

Scott Aycock of Tulsa, Okla. is a singer/songwriter and poet who co-hosts NPR’s Folk Salad and operates House Concerts Unlimited. More at https://www.publicradiotulsa.org/people/scott-aycock.

Chloe-Beth Campbell of Enid, Okla. is a young folk singer/songwriter who released her debut full length album, Remnant, in 2018. More at https://www.chloebethmusic.com.

Dallas Parker of Oklahoma City, Okla. is a rapper and student at ACM@UCO who performs under the name Faux Draco.

Ashliann Rivera is a 21-year old Brooklyn-born Oklahoma City-based singer/songwriter who has released three EPs since 2016. More at https://www.ashliannmusic.com/.

A panel of judges representing Red Dirt Relief Fund and the Jimmy LaFave Trust blind scored the songs to select the four finalists. The judges included:

Brad Piccolo is a vocalist/guitar/songwriter for Red Dirt Rangers and a current member of the Red Dirt Relief Fund Board of Directors.

Joel Rafael is an American singer-songwriter and folk musician from San Diego County, Calif. who recorded, toured and performed with Jimmy LaFave, most notably at Woody Guthrie Folk Festival and in the Ribbon of Highway, Endless Skyway tribute show to honor Woody Guthrie.

Roger Ray is a pedal steel/guitarist/songwriter, most notably as a longtime member of Jason Boland and the Stragglers, and former member of the Red Dirt Relief Fund Board of Directors.

Julie Watson is host of the NPR radio show “Tune in Tulsa,” a music journalist and Tulsa Roots Music co-director.

The contest was free to enter for Oklahoma songwriters who are unsigned without a current publishing deal.

The addition of the Jimmy LaFave Songwriting Contest comes after what many describe as the most moving moment in Gypsy Café history—when LaFave accepted the inaugural Restless Spirit award at the 2017 festival “in recognition of a musician who has impacted the Oklahoma music community in a spirit akin to Bob Childers.” This contest highlights the spirit of mentorship and musical discovery that have become hallmarks of a festival that brings more than 60 Oklahoma songwriters together to perform for fans from around the region. The contest was created and underwritten by old friends honoring LaFave, with cooperation of the Jimmy LaFave Trust, in the way he most wanted to be remembered—for songwriting.

Bob Childers’ Gypsy Café festival tickets that allow access to all venues start at $20. A limited number of Reserved Seating VIP tickets are available for $50. Tickets, lineup and more information at www.reddirtreliefffund.org/gypsycafe.

Red Dirt Relief Fund, a non-profit organization that provides a safety net of critical assistance to Oklahoma musicians, took over management of the festival in the fall of 2013 after Red Bull hosted the event in spring of 2011 and 2012. In 2018, the festival raised more than $30,764 for Oklahoma musicians in need. Since the Red Dirt Relief Fund was founded in 2012, it has provided more than $110,000 to musicians across the state.