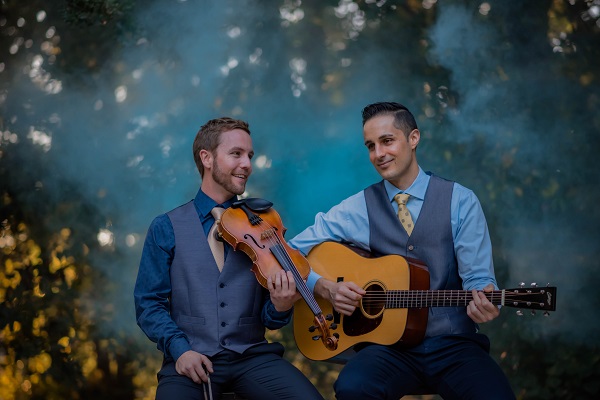 Blake Parks, left, and Michael Henneberry make up the Steelwind Duo. (Photo provided by Steelwind)
Posted on May 9, 2019

Media Release
(ARCADIA, OK)  — Indoor and outdoor concerts will round out the May live music offerings at the Arcadia
Round Barn.

Singer-songwriter Amanda Cunningham will provide Morning Music in the downstairs museum of the
barn on May 18. Steelwind Duo will take the outdoor stage on May 19 for the second Round Barn Elm
Tree Concert, and singer-songwriter Nellie Marie Clay will be the Morning Music artist on May 25.
Morning Music is from 10:30 a.m. to 12:30 p.m. every Saturday. Elm Tree concerts are from 2 to 4 p.m.
one or two Sundays a month, and fans should bring lawn chairs. Admission is free but donations are
accepted.

After living briefly in Tulsa and winning Red Dirt Female Vocalist of the Year, Cunningham moved to
Austin, Texas, and toured from California to Nashville, Tenn., before returning to live in Oklahoma City.
Her newest album is titled “Run.”

Steelwind Duo is made up of Blake Parks and Michael Henneberry of the Steelwind band. In their 10 th
year of songwriting together, Parks and Henneberry write all-original bluegrass songs with tight
harmonies and soulful instrumentation. Steelwind is scheduled to play this year at the Oklahoma
International Bluegrass Festival and at the Walnut Valley Festival in Winfield, Kansas.

Clay lived and performed in Alaska and Nashville before returning to her native Oklahoma, and she
recently moved to Okemah. With a reputation for waltzes, she describes herself as a “truth-teller in
three-quarter time.” Her new soon-to-be-released record is a collection of new, old-time songs
featuring many of Oklahoma’s top musicians and is entitled, “We Got Songs to Sing.”