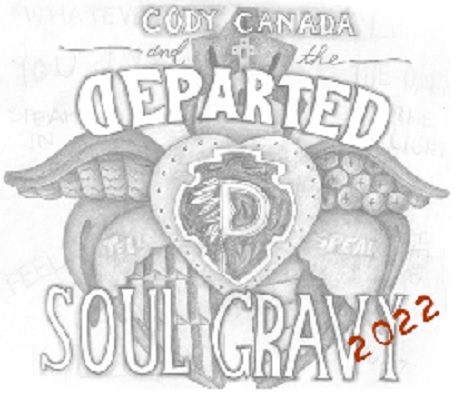 (Nashville, TN)– One of the most recognized names among the Oklahoma music culture, Cody Canada trails a 30-year music footprint stemming from the renowned music scene referred to as Red Dirt. It goes by many names;
some call it alt-country, some folk rock, some Americana, but no matter what you call it, the genre boasts an elite list of songwriters whose anthemic works have agelessly traversed decades and risen to legendary status. For over 15 years Canada fronted the aggressive country rock band Cross Canadian Ragweed, touring giants that dominated
the live music circuit nationwide until their break up in 2010. In 2011, Canada and bassist Jeremy Plato formed The Departed, a power trio along with drummer Eric Hansen, and since then has carried on in that gritty and lyrically provocative style that keeps packed crowds hanging on every word. On July 1 st , Cody Canada and The Departed will release the reboot of “Soul Gravy,” a catalog classic that Ragweed recorded in 2004 during their brief stay with Universal South Records. 18 years later, Canada still harbored a touch of regret that the original album was not recorded the way he wanted it to be due to the band’s relentless tour schedule.

“I never was satisfied with the recording of ‘Soul Gravy.’  The songs are still my favorite collection of songs– but the way we recorded it was with digital amps. I wanted to do it with tube amps and we just didn’t have time because we were so busy. That was a busy year so we recorded fast. No amps. All pod. I didn’t like that idea and got out voted. This time I did it the way I wanted. I can finally own recordings of these songs again and have them on vinyl.”

The 2004 original album peaked at #5 on the Billboard Top Country Albums Chart and featured the singles “Sick and Tired“; (a collaboration with Lee Ann Womack) and “Alabama“; both of which charted on the Hot Country Songs charts. Fast forward to 2021, the abiding pandemic gave the band the perfect opportunity to do something they had been talking about for years, build their own studio. With much more time on their side they began recording one-off tracks including a song called “Shut Up and Sing” featuring Kaitlin Butts and Todd Snider, and the band’s current single “If You Want It That Much.” That done, they moved on to the long awaited reboot of “Soul Gravy” bringing the sound back to its roots featuring a return appearance from Lee Ann Womack and performances from
some key folks who helped shape the original album.

“Randy Rogers and I wrote ‘Again,’ so, he’s on it. One of our students from the School of Rock in New Braunfels sings on it, Ray Wylie Hubbard sings on it, and I got another guy that’s been jammin’ with me named Ryan Snipes, he’s all over this thing. I really wanted to showcase the people that helped me write the tunes. I never really sang a song with Randy that was on one of our own records.”

“Soul Gravy” will be released digitally on all music platforms on July 1st, and on vinyl for the first time later this year. Rumor has it that a reissue of another catalog gem might be coming in the near future.