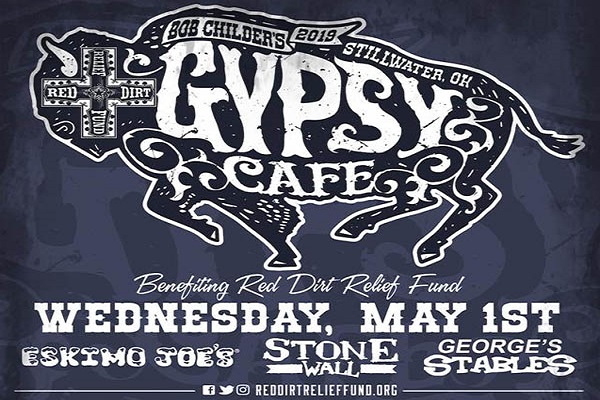 (Stillwater, Okla)  The all-star lineup for the 8th annual Bob Childer’s Gypsy Cafe has been announced!

The finalists of the Jimmy LaFave Songwriting Contest will be announced in early April, and the winner will be added to the lineup.

WHEN: Wednesday, May 1st from 4:30-11:45pm. Forty-five minutes acoustic sets will be staggered at each venue to allow fans to catch the most music. The finale will begin around 11pm. The full pairings and schedule will be released in mid April.

WHAT: Oklahoma’s largest songwriter festival features acoustic pairings of some of the state’s best songwriters swapping songs and stories inspired by the godfather of Red Dirt, Bob Childers. Each set will include at least one Bob Childers tune. Sets will be staggered across three venues, culminating with an all-artist finale on the Grand Casino Main Stage at Eskimo Joe’s.

All proceeds from the festival benefit musicians through the Red Dirt Relief Fund, a non-profit organization that provides a safety net of critical assistance to Oklahoma music people across all genres, not just Red Dirt. Operated by an all-volunteer Board, RDRF has granted over $110,00 to musicians in the state since 2012. Bob Childers’ Gypsy Café raised $30,764 for the cause in 2018, funding the full grant load for last year.

The festival is seeking vendors to sell locally-made products in the festival grounds on Elm Street in Stillwater from 4-10pm on May 1st. Anyone interested should contact Sarah Stueber at [email protected]

WHERE: All venues are in Stillwater, Okla.

TICKETS: Festival passes are $20 in advance at https://www.reddirtrelieffund.org/gypsycafe or in person at Eskimo Joe’s Clothes in Stillwater. Day-of tickets are $25 or $20 for students with ID. A limited number of reserved seating VIP tickets for Eskimo Joe’s Main Stage are $50. Fans interested in making a Red Dirt run in Stillwater can also purchase a “4-Day GA” Calf Fry ticket that includes a Gypsy Café festival pass at https://amplitix.com/tumbleweed/20901.

Opening Night at the Historic Dunkin Theatre
Oklahoma Musicians Go Live to Thank Fans on 12/3/19
Tom Skinner Music Festival raises over $15,000 for Oklahoma musicians in crisis!
Patty Griffin and John Fullbright announce show in Oklahoma City
Indoor and outdoor concerts coming up at Arcadia Round Barn
Fred Hill to provide May 4 music at Arcadia Round Barn