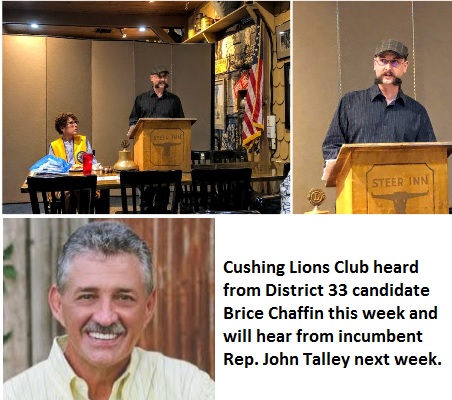 (Cushing, Okla) — The Cushing Lions were meeting for only the third week since Covid19 threw a monkey wrench into the club’s weekly meetings. Cushing Lions meet every Tuesday just before noon at the Steer Inn Restaurant located at Main & Linwood in Cushing.

The first week of every month is considered a business meeting and only on rare occasions are speaking guests invited to attend. The other Tuesdays throughout the month you will find invited guests of all sorts to enlighten
our members on numerous topics. Tuesday the 16th marks exactly two weeks until the Republican primary elections will be held and this year District 33 State Representatives seat will go to one of two people. Since this year there is no Democratic opponent, the June 30th primary will declare the winner between incumbent John Talley, and this week’s guest, first timer, Brice Chaffin.

Club rules frown upon allowing any campaigning through our club meetings; but since a smart responsible voter is an informed voter we still want to get to know the candidates, their family and their background. Brice Chaffin lives on the Stillwater border and received a Degree in Political Science at OSU. He is a married man with several children and works in the oil industry as a control operator in Cushing. Brice’s military career leads him to many different states as an assistant to the Chaplain. His reason for seeking office is to correct deficiencies he sees in the current administration.  Editor’s note:  Learn more about Brice Chaffin here: https://www.facebook.com/votechaffin/

Coming up…the second half of the ticket.

John Talley is no stranger to Cushing Lions as he has addressed us in several occasions. John currently has finished his second session at the capital in OKC as they abruptly adjourned sine die (Latin for “without a day”) and is done so when they don’t have a specific date when they will reconvene. Representative Talley also graduated from OSU with an agricultural degree and remains active with FFA and heavily involved in youth organizations including FCA where he ministers to athletes and coaches across district 33 and OSU. Married to his wife Caryl and making District 33 his home for over 40 years, the Talley’s have two grown children and three grandchildren. John will join the Lions for their weekly meeting on June 23rd and anyone is invited to join us at Steer Inn.