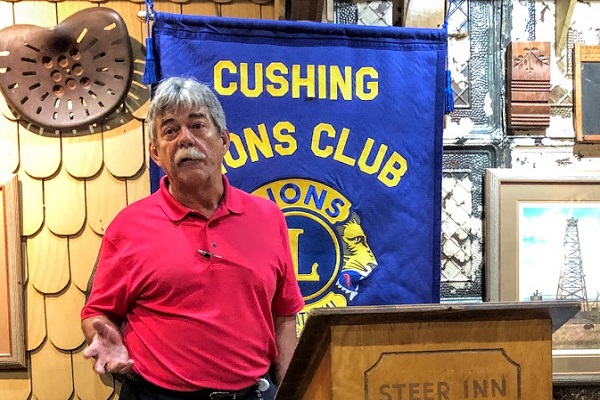 (Cushing, Okla) — The new Chief Executive Officer of Cushing Hillcrest Hospital joined the Lions for lunch this past Tuesday. Mr. Keith Mason told the Lions of his background in the healthcare system and how it came about that he would end up in Cushing.

Keith lives in Owasso and is also the CEO of Bailey Medical Center. Keith told us about his arrival in Oklahoma and in 2008 joined Bailey as the Chief Nursing Officer but his executive nature showed so well that in just two years he became CEO in 2010. He describes himself as a man that is called upon when trouble is brewing and they need the best to overcome.
He explained that it is known that Cushing Hillcrest took a blow in rankings of customer satisfaction among reputable hospitals in the region losing doctors, nurses, programs, and worst of all patients to hospitals that were not even close to Cushing. This problem, combined with issues of a building in disrepair, had the medical field grumbling that Hillcrest might be closing its doors. This was confirmed by Mr. Mason; but he has faced worse battles and has already made giant strides putting a bandage on the wound and working towards rehabilitation.  Keith informed us of seven recent hirings and discussions with other doctors that will lead the path back to making Cushing Hillcrest “OUR HOMETOWN HOSPITAL.”
It was not an easy Lions Club meeting for Keith to attend as many “DIRECT” questions were shot at him which he did not deflect rather he passionately answered with “DIRECT” answers. As a two time winner of CEO of the year by Ardent Health Services and his 35 years being in healthcare – it was a “no-brainer” that Ardent has not given up on Cushing. Rather it has pulled out its “big gun” to rectify the problem.
It won’t be an overnight fix, but Keith Mason told them to keep the politics out of the equation and he was “all in” on rebuilding Cushing Hillcrest.