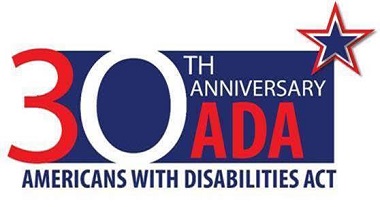 Oklahoma City – Supporters of the Americans with Disabilities Act are celebrating the 30th anniversary of the landmark civil rights law, which toppled barriers to employment, education and access to buildings for people with disabilities.

The ADA prohibits discrimination against individuals with disabilities in all areas of public life, including jobs, schools, transportation, and all public and private places that are open to the general public. The purpose of the law is to make sure that people with disabilities have the same rights and opportunities as everyone else.

The act was signed into law by President George H.W. Bush on July 26, 1990, and during the ceremony, he said, “Let the shameful wall of exclusion finally come tumbling down.”

Executive Director Melinda Fruendt, of the Oklahoma Department of Rehabilitation Services, said the push for the ADA unified the entire disability community in the fight for the rights and protections that had previously been denied.

To qualify for protection under the ADA, a person must have a physical or mental impairment that affects their major life activities or have a relationship with an individual who qualifies as having a disability. The law is routinely updated. In 2008, the ADA Amendments Act (ADAAA) was signed, giving a broader term to the word “disability” and allowing more citizens to be protected.

In the state of Oklahoma, at least one in six individuals has a disability, according to the latest research in 2017. DRS staff work to help Oklahomans with disabilities by assisting them to find employment and achieve their goals, so they may live an independent life. In State Fiscal Year 2019, 82,787 Oklahomans were served by DRS.

Since the ADA’s passage, Americans with disabilities have gained more acceptance and consideration. Technology has helped bridge gaps in communication and access, offering opportunities to people with disabilities to achieve the same education and employment goals as any other American. ADA guidelines also guarantee the right of workers who need accommodations to perform their jobs to receive them.

Commissioner Emily Cheng has served on DRS’ Commission for Rehabilitation Services for three years. Cheng has cerebral palsy and remembers growing up in the 1980s when captioning, ramps or braille were rare. She said she has witnessed great strides in accessibility since the ADA’s passage.

“Thanks to the ADA, these accessibility items are more common now because people have the ‘push forward’ to provide them, it’s no longer a choice,” Cheng said. “And ADA accessibility statements are just about everywhere now on employers’ job opening websites.”