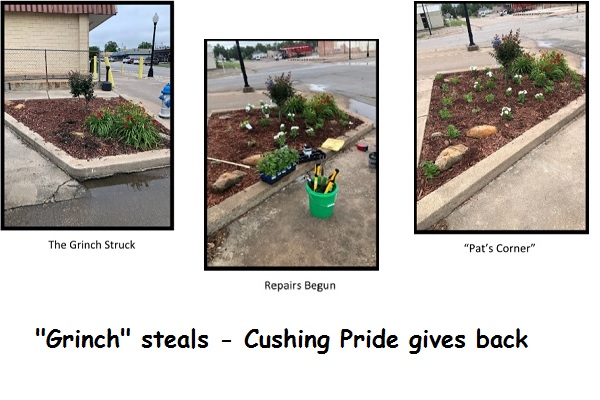 I personally moved to Cushing in 2017 and was offered and accepted the volunteer position as Director of Cushing Pride in spring of 2018. It is my job to recruit other volunteers that have the same passion as myself to complete
beautification projects that I develop. One of these is what I have named “May on Broadway” and hopefully you read all about it.

Cushing Pride, along with DCRA, planted over 200 plants along Broadway in 14 flowerbeds. There is one special
triangle flowerbed at the northeast corner of Noble & Broadway that is nicknamed “Pat’s Corner.” While planning for May on Broadway I was informed by our city manager to leave that corner alone as it is a passion of Pat Fechner,
with the help of her husband John, to cultivate that flowerbed and change it throughout the year.

Recently I was contacted by Pat in a text that I can only describe as saddening and disappointing. Pat and John had just spent good money on the flowers and a rose bush that they planted and mulched before leaving on a
short vacation. Upon return Pat drove by to discover that thieves had stolen better than 50% of the bed – including the rose bush – just leaving holes all over the bed. Pat was so upset that it took the fun and enjoyment she receives in doing this, just as the “Grinch” did as he stole Christmas in Whooville.

I felt so bad that I immediately wanted to rectify the situation and did so with a call into City Manager Terry Brannon on his holiday. He immediately responded with an approval for me to spend Cushing Pride funds to once again plant the flowerbed.

The very next day I met with Pat to pick out an assortment of flowers and I had them planted within 2 hours thereafter. Discussing the situation with Pat, I showed her the response from social media that was generated and how the story, in 24 hours, had reached over 2600 people with 1072 people engaged in the story – all showing their disapproval of the “Grinch” and sadness that this happens in our city. The support for “Pat’s” corner was heartwarming with offers of help and donations.

Mr. Grinch, if you are reading this story, I ask you to search your conscience and ask yourself, “Is the pleasure you are receiving from your stolen goods worth the disappointment of the gardener, the community, and your God.”

I am happy to say that Pat has agreed to stay active in that garden and knows the support she now has behind her.