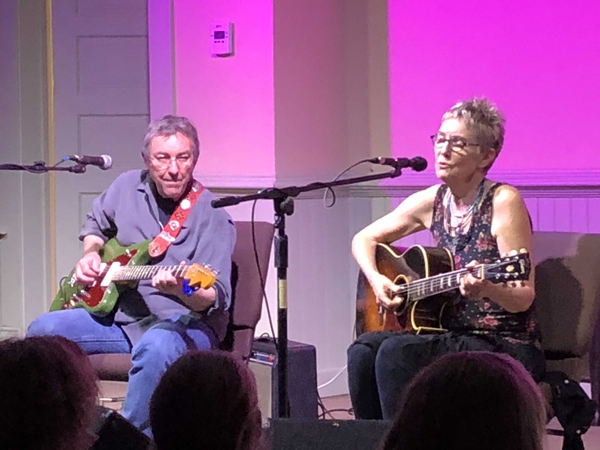 (Perkins, Okla.) — It was another evening of great music at the Old Church in Perkins on Saturday, March 2nd!  It was the final show for the winter Cimarron Breeze concert series with Oklahoma singer/songwriter Nellie Clay, along with Kyle Reid and Mary Catherine Reynolds, opening for Grammy-nominee Eliza Gilkyson.

Nellie charmed the audience with her storytelling songs, quick wit and soulful country voice.  And although it was the first time for Nellie and Mary Catherine to share the stage, you would have thought they had been singing together forever.  Their harmonies were simply beautiful.   Kyle was the perfect side-man on keyboard, guitar, as well as his trademark cigar-box guitar.

And then there was Eliza…a legend indeed!  Eliza Gilkyson has more than 17 recordings under her belt, including her latest CD – Secularia.  Her songs have been covered by Joan Baez, Bob Geldof, Sam Butler, Roseanne Cash and more.  The Nocturne Diaries, 2014, earned her a second Folk Music Grammy nomination, as well sas Songwriter of the Year and Best Folk Artist awards at the 2014 Austin Chronicle SXSW Music Awards.

Who better to accompany Eliza than Oklahoma’s own music legend, Terry “Buffalo” Ware!  He accompanied her with ease as she mesmerized her audience with story and song.

It was my first time “experiencing” Eliza.  Her anecdotes and lyrics touched my soul and stole my heart.  I can’t think of a better place for that experience than the intimate setting of the Old Church.

For more information on the artists: