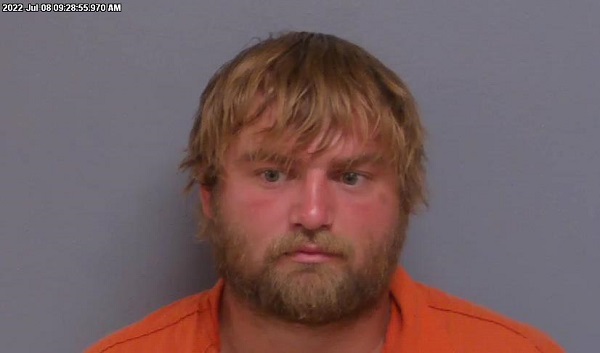 (Stillwater, Okla.)  — A 27-year-old man has been jailed on $20,000 bail pending an Aug. 1 court appearance on charges of attempting to elude Perkins police from Highways 33 and 177 to his residence in Stillwater while narrowly missing hitting other vehicles — along with possessing marijuana and methamphetamine.
If convicted of his two-count charge, Kody Brett Shepherd could be incarcerated for as long as six years and fined $6,000.
Shepherd was arrested at 8:48 am on July 8 following a chase from Perkins to Stillwater during which Stillwater police officers used stop sticks twice to puncture his vehicle’s tires, and Payne County sheriff’s deputies tased him twice after he ran into his residence, Perkins Police Officer Hunter Bradley alleged in an affidavit.
About 36 minutes earlier, the Perkins officer had attempted a traffic stop on the defendant’s Nissan Altima that had a brake light not illuminated at the intersection of Highways 33 and 177, his affidavit alleged.
“Deputy Chief Kyle Howard, who was riding with me, used our patrol vehicle radio to notify dispatch of our location, and that we were northbound on US 177 N with a vehicle that was failing to yield,” the Perkins officer alleged in his affidavit.
“Payne County sheriff’s deputies met us in the area of US 177 N and E 36th Ave. The driver of the Altima nearly collided with three Payne County Sheriff’s Office patrol vehicles as they attempted to stop the vehicle. Shortly after, the Altima nearly hit a Jeep that had pulled to the shoulder,” the affidavit alleged.
At US 177 N, a Stillwater police sergeant used stop sticks to puncture the tires on the vehicle, which continued north where another Stillwater police officer used stop sticks to puncture the remaining tires on the vehicle — which continued until arriving at the defendant’s residence where Shepherd ran inside and failed to comply with orders until he was tased twice by Payne County sheriff’s sergeants, the affidavit alleged.
Shepherd said, “the reason that he didn’t pull over when he saw our lights is that it is his wife’s birthday today, and he wanted to wish her a happy birthday and tell her that he loves her. Deputy Chief Kyle Howard asked him about drugs in the vehicle, and he said there were no drugs in the vehicle. While we were speaking with him, I informed him that he had a warrant through Payne County for driving under suspension and resisting arrest,” which Shepherd claimed he was unaware of, the Perkins officer wrote in his affidavit.
“Life Net arrived and Shepherd was placed into the ambulance to be assessed by medical professionals. While I was in the ambulance with Shepherd, Deputy Chief Kyle Howard noticed in the center console of Shepherd’s vehicle in plain view a black plastic container with the word ‘Dubway’ Dispensary. Deputy Chief Howard seized the container and gave it to me where it was secured in my patrol vehicle,” the Perkins officer alleged in his affidavit.
“When I returned to the Perkins Police Department, I weighed the green leafy substance (.51 grams), took photos of the substance and the container it was found in, packaged the evidence to be submitted to OSBI for chemical testing, and placed it into the evidence locker,” the Perkins officer alleged in his affidavit.