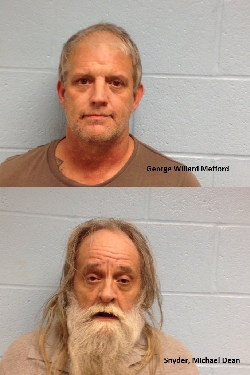 (STILLWATER, OKLAHOMA / 01-30-2019) — On 1/30/2019 at 9:17 AM, Stillwater Police officers from the patrol division and detectives from the Special Projects Unit assisted by deputies from the Payne County Sheriff’s Office served a search warrant at a residence near 56th Avenue and Jardot Road just southeast of Stillwater city limits. Two residents of the home, identified as 61 year old Michael Dean Snyder and 50 year old George Willard Mefford, were detained at the scene.

During a search of the residence, 6.5 ounces of methamphetamine, 5.6 ounces of marijuana, packaging materials, digital scales, 3 long guns and 4 pistols were seized.