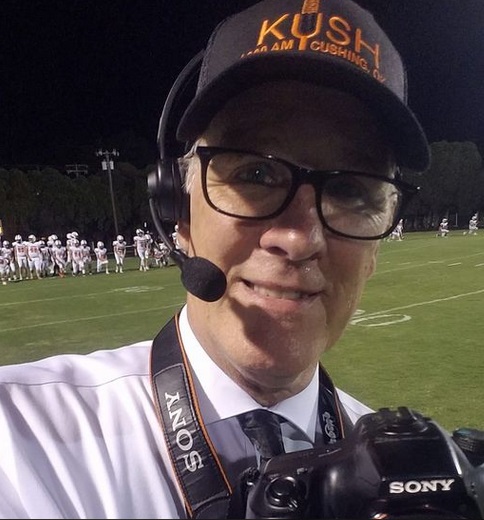 (Bristow) — The Cushing Tigers rode their high-flying offense to a 35-26 victory over Bristow in what has long been a week one rivalry game for these two teams. Running a confusing option game, Bristow opened the scoring with a one yard touchdown run by quarterback Sutton Titsworth. The Tigers hit back fast with a 69 yard TD pass from Blaze Berlowitz to Camden Crooks. Cushing then padded their lead wtih a 5-yard run by Noah Jones who bounced a run outside and went into the end zone standing up. Just as the Tigers widened their lead to 21-7 after a perfect nine-yard TD pass from Berlowitz to Crooks, Bristow fans cheered as Pirate Alex Winter took the ensuing kickoff 85 yards to the house. The half ended closer than Tiger fans thought it would with a 21-14 Cushing lead.

In the third quarter, Bristow came out brandishing their own offensive power that sent them deep into last year’s playoffs. First, an 8-yard touchdown run closed the score gap to 21-20 following a missed extra point. The Pirates followed that right up with another short touchdown run that put Bristow up 26-21. Those scores got the Tigers’ attention who went back to their vaunted passing game. Blaze Berlowitz hit his brother, Brody Berlowitz, on a perfect fade pattern in the corner of the end zone for a 15-yard touchdown. After a two-point conversion, the Tigers were back on top to stay at 29-26. Following a never-seen-by-this-reporter kickoff by Riley Matheson that landed just in bounds before bouncing backwards into the hands of Camden Crooks, the Tigers scored a dagger TD with QB Berlowitz hitting Lane Yaunt in the end zone for a 4-yard touchdown that sealed the deal at 35-26.

While Cushing coach Rusty Morgan was happy to get away from Bristow with a victory, he said the team would need to clean up penalties, especially personal fouls, and work more on special teams after giving up the long touchdown return by Bristow. On the positive side, the Tiger offense exhibited more of what got them to the state semi-finals last year and the defense showed some aggressive gang tackling that stopped several misdirection runs by Bristow meant to throw off the defense. Up next for the Tigers is the Battle of Highway 33 against Perkins-Tryon which will be Cushing’s first home game of the season.