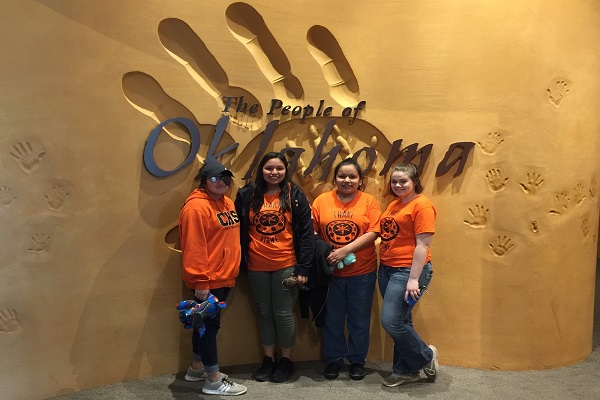 (Cushing, Okla) — The Native American Language Fair was held on April 2, 2019 at the Sam Noble Museum on the University of Oklahoma campus where Cushing High School was represented by four Native American students and their Title VI sponsor Debbie Brown. The students competing for Cushing were McKenzie Franklin, Jasmine Franklin, Desirae Higgins and Serenity Littlehead.

Cedirc Sunray from the Sauk Language Department (Sac and Fox Nation) worked with Native American students from several surrounding schools. The schools worked together on the same material and competed in the large group category and took home a first place trophy. Sac and Fox Nation treated all of the participants from the Sauk Language group to lunch at CiCi’s Pizza in Norman after the completion.

Cushing was well represented at the Native American Language Fair. Debbie Brown plans to make this a yearly event.