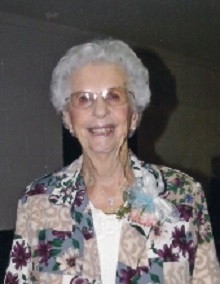 The daughter of the late Forrest Leroy Earlabaugh and Sylvia Rich Earlabaugh, Joydell was born on April 13, 1928 in Prague, Oklahoma and was raised and educated in Prague, Meeker and Cushing. She was a graduate of Cushing High School with the class of 1944.

She was a longtime member of the First Assembly of God Church; she enjoyed crocheting, watching ball games of all kind and she loved doing Missionary work. Her first Missionary trip was in August of 1986 and her lasts trip was in 2005, returning to Mexico.

In addition to her parents and husband, she was preceded in death by one daughter-in-law Mary Lou Cargill.

Funeral services are planned for Monday, July 20, 2020 at 10:00 a.m. in the Faith Baptist Church with Pastor Robert Nacci, officiating.

You may share your condolences with the family at www.davisfh.net.

Services are under the direction of the Davis Funeral Home.

To send flowers or plant a tree in memory of Joydell Laverne Cargill, visit the Tribute Store.