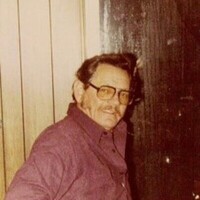 He was born on February 3, 1926 in Schlegel to Oscar Hopkins and Mayme Cooper Hopkins.  He was raised and educated in Schlegel and Yale areas.

He was a decorated World War II Veteran and served from 1943 – 1946 in the Southwest Pacific.

He was a retired truck driver and in 2001 he was awarded the Golden Achievement Award from the American Historical Truck Society for driving fifty consecutive years.  He continued to drive until 2011 when he turned 85.

He was married to Claudia Vickers on February 11, 1989 and they remained together until his death.

He was a member of the First Baptist Church in Drumright.

His survivors include his wife Claudia of the home, one daughter Brenda Pickle and husband Benny of Prairie Grove, Ar., two sons Danny Hopkins of Cushing and Corbin Hopkins of Tulsa, sister Flora Todd and husband Norman of Cushing, brother-in-law Wyatt Earp and wife Angela of the Oak Grove area, nieces Raegan, Katelyn, and Jenah.  Two grandchildren, eight great grandchildren and one great great grandchild and a host of friends.

He was a good, kind and loving man and will be greatly missed.

Condolences and online guest book are available at www.palmermarlerfh.com.