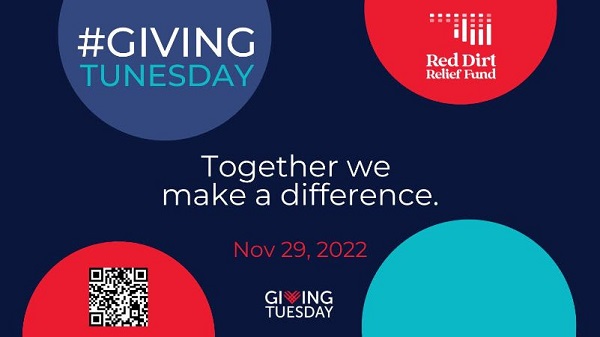 (Oklahoma) — Ryan Lindsey of acclaimed Oklahoma indie rock band, BRONCHO, is one of 27 artists who perform live from their social media channels on November 29 as part of #GivingTunesday. Now in its fifth year, #GivingTunesday is organized in the spirit of Giving Tuesday by Red Dirt Relief Fund, the nonprofit serving Oklahoma music professionals in need, as a way to thank fans and donors for their support.

Lindsey joins artists like Tulsa powerhouse vocalist, Cassie Latshaw; Oklahoma City songwriter, Dylan Stewart; and even a group of the organization’s Board of Directors including John Cooper and Brad Piccolo of the Red Dirt Rangers, Roger Ray, founding member of Jason Boland & the Stragglers, and Blake Parks of the bluegrass group Steelwind. The full schedule with links to performance pages can be found here: https://www.reddirtrelieffund.org/givingtunesday2022/

According to Red Dirt Relief Fund Executive Director Katie Dale, “Giving Tunesday is one of my favorite days of the year because the gratitude from music professionals we serve becomes tangible in their performances. We are also offering 25% off all purchases at our new merch store on Black Friday, Cyber Monday and Giving Tuesday with the code GIVING–that’s what this day is all about after all.” The store and other ways to support the cause can be found at reddirtrelieffund.org.

Over the past decade, Red Dirt Relief Fund has delivered almost $660,000 in aid to 600+ Oklahoma music professionals, from worship musicians to hip hop producers and red dirt songwriters to stagehands. Relief grants fund living expenses like rent, utilities, and medical bills while these individuals recover from unavoidable emergencies.

Giving Tuesday is the largest international day of giving created in 2012 to shine a light on benevolence following traditional shopping days, Black Friday and Cyber Monday. 35 million people participated in Giving Tuesday in the United States in 2021.