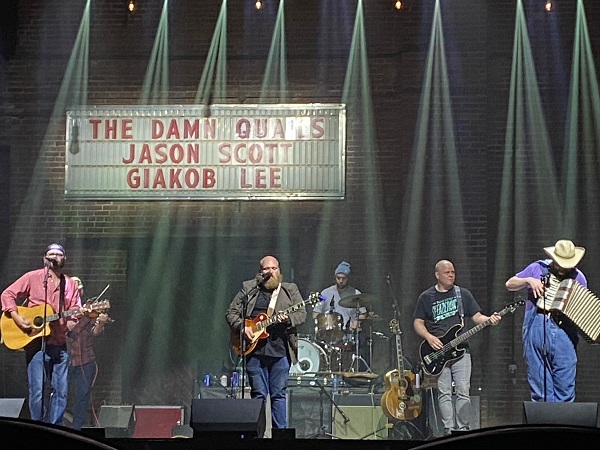 The Damn Quails returned to Cushing as the headliner for the reopening of the Dunkin Theatre. (photo by Sean Payne)
Posted on May 28, 2021

A review by Molly Payne

(Cushing, Okla) — The much-anticipated reopening of the historic Dunkin Theatre in the Broadway District in downtown Cushing was nothing less than amazing on Thursday night.

Not only was an amazing amount of Oklahoma talent featured on the stage for the first time in decades, but it was an amazing transformation of an iconic building.  It was also amazing because it seemed nearly impossible things would come together in time for opening night.

But it happened.  And it was awesome.  The staff was friendly and prepared.  The place looked great – from the tile on the floors, to the smell of the popcorn, to the state of the art lighting and sound.  It was all top notch.

And then there was the music.

Geoff’s brother, Giakob Lee, kicked off the evening with a set of his own songs from his album, Too Often.  Plans to release it last year were foiled by the pandemic, but it’s one I’ve personally been enjoying since it was gifted to me and my ears perk up each time the title cut airs on The KUSH.  Born out of heartache, his songs resonated with the audience, especially coming out of such a tough year. Giakob did a wonderful job getting us ready for the next performance – the Jason Scott Band.

We’d had Jason in studio and I’d seen him perform acoustically, but I was blown away at the way he and his fellow band members rocked the stage.  They were sultry and cool with amazing guitar riffs and a touch of Red Dirt bleeding through.  The Jason Scott Band is definitely one to watch.

Aside from being one of the best and most notable bands to come out of Norman, The Damn Quails have a long-time association with Cushing.  Before taking flight as The Damn Quails, Bryan White and Gabe Marshall were early attendees of Tuesday Night Music Club at the DJ Duncan and Rick Reiley home.  The late Sean Kelly discovered their talent there and KUSH was the first radio station to ever play one of their tunes.  It seemed only fitting they would be the headliner for opening night at the Dunkin Theatre.   As expected, the Quails put on a memorable and energetic show – rocking guitars, drums and fiddle, great vocals and an array of instruments, including the accordian, played by fellow singer/songwriter Buffalo Rogers.

According to Beasley, the Dunkin theatre was only 60 percent finished last night.  However, he and his team have been giving 100 percent to the project – and it showed.  He was quick to express his thanks to that team, the City of Cushing, and all those who have shown their support of his dream and share in his vision for Cushing.

If you’re going to dream…you might as well dream BIG.  Thank you Geoff and Dawn Beasley for bringing your dreams to life!

We’ll see you at the show!