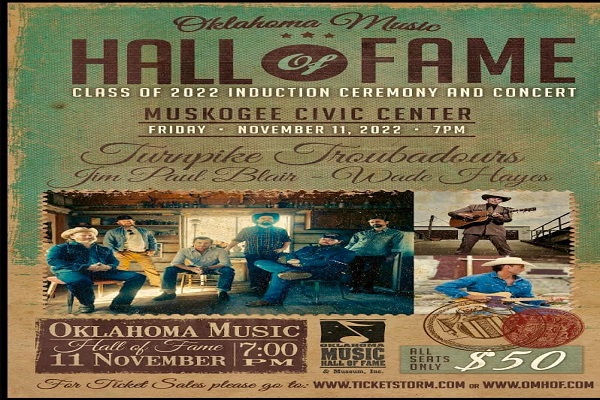 (Muskogee, Okla) — In celebration of their 25th Anniversary, the Oklahoma Music Hall of Fame (OMHOF) has released the names of their second installment of 2022 inductees.  The roster includes some of Oklahoma’s most accomplished singer/songwriter/musicians who will be honored in a ceremony held at the Muskogee Civic Center on Friday, November 11.  Joining the ranks of OMHOF’s twenty-five years of honoring outstanding Oklahoma artists and music industry leaders are, Nashville’s singer/songwriter Wade Hayes from Bethel Acres, Oklahoma, Muskogee’s own Jim Paul Blair (posthumous) and the popular Turnpike Troubadours from Tahlequah, Oklahoma.

Often thought of as one of the best in country music for his ability to accurately capture hope and heartache, Wade Hayes has been actively contributing to the country music genre since his early 20’s when he had an impressive string of hits including “Old Enough to Know Better,” “I’m Still Dancing with You,” “On a Good Night,” and “What I Meant to Say.”  He began realizing his goals when Johnny Lee tapped him to be his lead guitarist, but it was apparent Hayes wasn’t meant to be a side man.  He landed his first recording contract with Columbia Records within nine months of moving to Nashville.  “Old Enough to Know Better” hit #1 on Billboard’s Hot Country Singles and Tracks chart and he was nominated for the ACM’s Top New Male Vocalist honor.  Two of his four major label albums have been certified Gold by the RIAA.

In 2009, he released the critically acclaimed independent album, “A Place to Turn Around,” and continued to tour extensively until he was diagnosed with stage IV colon cancer.  He fought his way back to health only to have the cancer return in 2012.  However, he is now cancer free and his new album was inspired by a conversation with his oncologist, “Go Live Your Life” is an upbeat anthem about making the most of everyday.

In addition to writing and recording, Hayes has been back on the road, touring this spring.  He also spends time on his 11-acre farm outside of Nashville where one of his favorite hobbies is restoring old pick-up trucks.  Hayes and his band will kick off inductee performances at the November 11th event.

Jim Paul Blair always bragged that he was a Texan having been born in Odessa, but he was an Okie through and through.  After high school in Clayton, he received a scholarship from T. Boone Pickens to attend Oklahoma State University.  Although he studied accounting during the day when he was in school, he spent every night playing music.  He was a member of Student Entertainers along with his sister Karen and a guy named Garth Brooks.  He graduated with a degree in accounting while playing bluegrass with The Red Valley Barnstormers.

Jim became the only banjo-pickin’ accountant at Price Waterhouse followed by becoming DFO of The Rehab Group in Nashville at the age of 28.  The music continued for him during his time in Nashville as he played with the Neverly Hillbillies and the Neverly Brothers.  In 1998 he moved back to Oklahoma and became on of the most enthusiastic Okies from Muskogee.

Blair toured considerably with his band, City Moon and they had a successful tour of Europe.  He portrayed Hank Williams Sr. in the band Hankerin’ for Hank, and also was given the lead role in Muskogee Little Theatre’s production of “The Buddy Holly Story”.  He released a solo banjo project in 2003, “Fresh Off The Strings.”

Born into a musical family, Blair was the proud son of Ramona Reed, also an Oklahoma Music Hall of Fame inductee who performed at the Grand Ole Opry alongside Bob Wills and the Texas Playboy Band for years.  Jim was always available to inspire and give a helping hand to up and coming musicians as they established their own careers.

During his last days, Jim was held up in prayer by a host of friends near and far, none of whom can yet understand why his time here was so short.  He packed much life and adventure into his 58 years and wherever he went, laughter, joy, and music followed.  Band members of City Moon, Jim’s Hankerin’ for Hank band, and his Buddy Holly Tribute Show will each play some of the great music Jim was known for.  Prior to his passing in February of 2020, Jim had been working on an album and last November the self-titled “Legacy” album was posthumously released.

Described as a gritty, country-leaning rock band out of eastern Oklahoma, Turnpike Troubadours have become one of the most popular bands working, touring, and recording today.  Musicians RC Edwards, Kyle Nix, Ryan Engleman, Gabriel Pearson, Hank Early, and front man Evan Felker make up this successful band of players.  After a two-year hiatus the band is back on the road selling out large venues and arenas.

Their debut album, “Bossier City” came only a month after the forming of the band to have something to sell at their early shows.  This was followed by their very popular “Diamonds and Gasoline” in 2010, produced by Oklahoma Music Hall of Fame inductee and legendary singer/songwriter, Mike McClure and cemented the band’s place in country music history.  “A Long Way from Your Heart” was released and peaked in 2017 at number three on Billboard Top Country albums chart.  Lead singer/songwriter Evan Felker talks about their being influenced heavily by the popular Oklahoma band Cross Canadian Ragweed and fellow Okie musician Jason Boland.  This year the Troubadours are back on the road thrilling fans all over the country.

Oklahoma Music Hall of Fame Executive Director, Tony Corbell says, “as far as I am concerned there hasn’t been a more talked about band since I began following the music scene in Oklahoma.  These guys are truly hitting on all cylinders right now and since late spring 2022 they have sold out shows in many of the best arenas and venues.  We are thrilled they will be playing for our show this year and they promise an entertaining evening!”