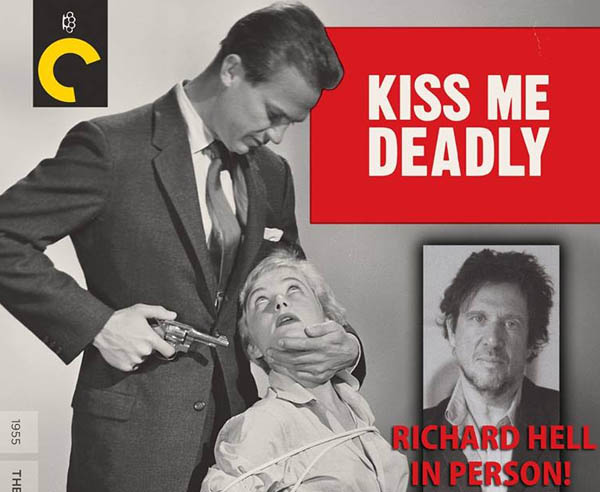 (Tulsa, Okla.) –You might be familiar with the name “Richard Hell” from the influential NY rock acts The Heartbreakers, Neon Boys, and Television, or as the frontman for The Voidoids. One of the main subjects of the top-selling music biography Please Kill Me, he’s widely considered the leading originator of the entire punk genre – his style and discography representing the very foundation of punk’s staggering history.

Hell has spent the last 3+ decades on a consistently relentless tide of creativity. He has acted in movies, written novels, formed new music acts like Dim Stars, and – more recently — has become a respected film journalist. Over the past several years, he’s presented his favorite movies with introductions that incorporate his unique observations and humor.

About the film:
If you took the most misanthropic private detective in the world, injected him with 10,000cc’s of testosterone and kicked him down the elevator shaft of a burning building, you’d still only be halfway to Mike Hammer. Masterfully played with snide, pugilistic hatred by Ralph Meeker, our hero sets out on a rampage of crime-fighting, cop-fighting, and every other type of fighting he can get his meaty mitts on. Along the way, he’ll orbit a few heavenly bodies and get embroiled in a pitch black web of intrigue involving a radioactive suitcase. It’s supreme Hollywood masculinity, stinking drunk and stained with sweat, from visionary blue collar filmmaker Robert Aldrich (“Whatever Happened To Baby Jane?”)

Tickets are On Sale Now!

The non-profit Circle Cinema is Tulsa’s only running historic movie theatre, showing independent, foreign, and documentary films. The Circle Cinema is dedicated to using film to foster understanding and appreciation of the human experience while creating community among the viewers.