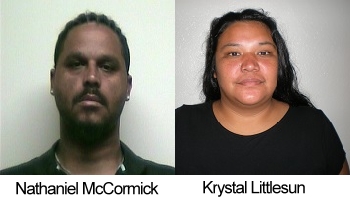 (Stillwater, Okla.) — A Stillwater woman, who was arrested last summer by Stillwater police with a man at the Wilshire Inn in Cushing and jailed on $250,000 bail on charges of trafficking methamphetamine and possessing two guns during the commission of a felony, was ordered Friday into the Payne County Drug Court program pending her sentencing on Aug. 1, 2023, on a reduced charge of possessing the drug with intent to distribute, along with having weapons, to which she pleaded guilty.
Krystal Dawn Littlesun, 37, and Nathaniel Marteze McCormick, 36, of Cushing, were both ex-convicts when they were arrested at 3:30 pm on July 23, 2021, by Stillwater Police Detective Josh Carson, who had learned that McCormick had an outstanding felony warrant and was staying with Littlesun at a Cushing motel, according to his affidavit.
“McCormick was recently involved in a shooting inside Stillwater city limits and ran from officers when contacted,” the detective wrote in his affidavit filed last summer.
“We arrived at the Wilshire Inn motel and entered the west parking lot. When we pulled in, I observed Deputy Nack and Detective Elliott stop their vehicle and observed Nathaniel McCormick rush into a room. McCormick was ordered to the ground and complied just inside the door,” to a room rented by Littlesun. the detective wrote in his affidavit.
“Krystal Littlesun was sitting on the bed in the room. As I stood McCormick up, I observed a large amount of methamphetamine, working digital scales, and packaging material in plain view inside the room on top of a small refrigerator. Two guns were sitting in an open purse next to Littlesun,” the detective wrote in his affidavit.
After the detective went to Stillwater to obtain a search warrant, he returned to the Cushing motel to serve it, the affidavit said.
“Methamphetamine, working digital scales, packaging material and two guns were seized. One gun was a .22-caliber revolver,” chamber-loaded with the serial number scratched off, the affidavit said. “The other gun was a .380-caliber semi-automatic pistol,” the affidavit said. A total of 38.2 grams of methamphetamine was found, the affidavit said.
McCormick was sentenced four months ago to 12 years in prison for drug trafficking, with a concurrent five years for the gun offense, and one-year for having drug paraphernalia, as part of a plea bargain with the prosecution approved by District Judge Phillip Corley.
According to court records and the Oklahoma Department of Corrections, McCormick, who had been released from prison in 2017, had prior felony convictions from Payne, Creek, and Tulsa counties — including for methamphetamine possession, stolen property possession, maintaining a place for keeping or selling drugs, domestic violence, having a stolen vehicle, and false personation.
Littlesun, who had gotten out of prison in 2018, had previously been convicted of drug possession in 2014 in Pottawatomie County for which she was imprisoned and of drug possession in 2007 in Payne County for which she was given probation under a deferred sentence, DOC records show.