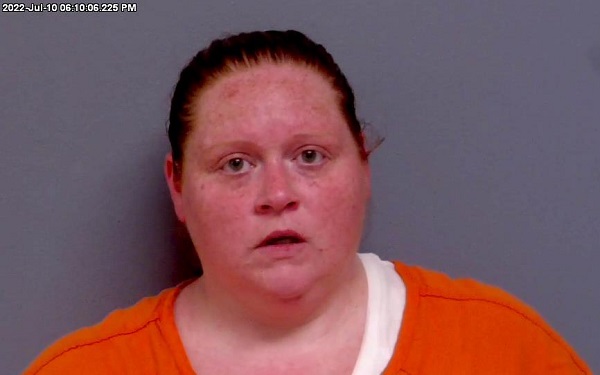 (Stillwater, Okla.) — A Perkins mother who was driving a van carrying four children when it crashed on Highway 33 — causing the death of her 9-year-old stepson — was ordered to stand trial on a first-degree manslaughter charge at the close of a preliminary hearing last week.
Sarah Elizabeth Davidson, 32, who remains jailed on $50,000 bail pending her Dec. 6 trial court arraignment, was originally accused of driving under the influence of methamphetamine during the Dec. 6, 2021, collision at 4:33 pm on Highway 33 at Fairgrounds Road.
But on the day before the preliminary hearing last week, allegations in the manslaughter charge were amended to accuse her only of causing the fatal crash by losing control of her vehicle while driving under suspension or in the alternative by driving left of center.
Although the accident occurred nearly a year ago, no one from the Oklahoma State Bureau of Investigation, which conducts toxicology analysis, testified at the Nov. 3 preliminary hearing regarding the presence of any drugs in her blood.
However, Oklahoma Highway Patrol Trooper Chad Pape testified that when he interviewed Davidson at a hospital, she said that on the night before the fatal crash, she had taken methamphetamine about 8 pm and used marijuana at 10 pm. On cross-examination, the trooper testified that Davidson said on the morning of the crash she took only her prescribed medications, which defense attorney Royce Hobbs said were not controlled substances.
At the time of the crash, Davidson said, “traffic slowed down in front of her. She said she was not distracted before the collision. She said she started braking, swerved off, corrected, came back in the lane and was struck by a red vehicle,” the trooper testified.
The 2015 Honda Pilot, which Davidson was driving eastbound on Highway 33, crossed the centerline of the two-lane divided highway, went in a broad slide in the westbound lane and was struck by a red Chevrolet pickup, according to preliminary hearing testimony.
The Chevrolet pickup had severe front-end damage; the Honda Pilot had severe damage to the rear passenger side, OHP Trooper Robert Regnier testified. Davidson’s two stepsons were ejected through the rear window as the van rotated, the trooper testified.
Davidson’s 9-year-old stepson was taken to the Stillwater Medical Center where he was pronounced deceased, OHP Trooper Steve Burrows testified. Her 11-year-old stepson received a broken clavicle, broken scapula and a fractured rib, according to an affidavit by OHP Trooper James Stacy.
Davidson’s 5-year-old son had two broken femurs and a minor brain injury; her 2-year-old daughter received a possible concussion and other minor injuries, the affidavit said.
An 11-year-old girl in the Chevrolet pickup operated by her mother, Leslie Wilkerson, who was traveling westbound on Highway 33, had a severely bruised and injured face but no broken bones, the affidavit said. “Neither Leslie Wilkerson nor Sarah Davidson was seriously injured,” the affidavit said.
The defendant said that neither of her stepsons was restrained by seatbelts or child restraints at the time of the collision, the affidavit alleged. Her 5-year-old son was not restrained until shortly before the collision when her 11-year-old stepson took it upon himself to secure him in a child restraint, the affidavit alleged.
If convicted of first-degree manslaughter, Davidson could be given a prison term ranging from four years to life.