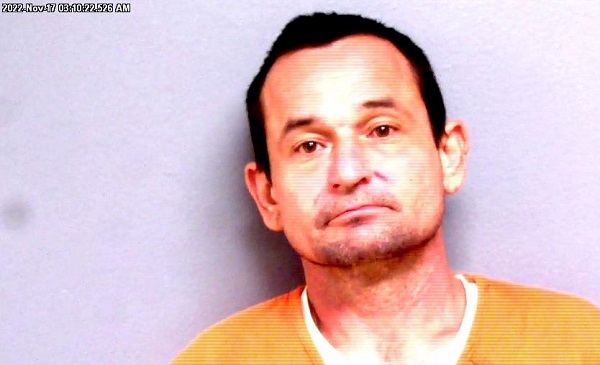 (Stillwater, Okla.) — A Pawnee man, who reportedly told a police officer that he wanted to go to jail, has been charged with breaking two windows at Simpson’s Gym and Chiropractic in Cushing.
Ronald Lee James, 41, has been ordered held on $5,000 bail in the Payne County Jail pending a Dec. 5 court appearance at which he can seek a preliminary hearing on a felony charge of malicious injury to property.
James was arrested at 12:37 am on Nov. 17 by Cushing Police Officer Cody Carpenter outside Simpson’s Gym and Chiropractic where two windows had been broken, an affidavit said.
The officer had been on patrol in the 2000 block of E. Main Street in Cushing at 12:01 am when James waved and started to walk toward him, according to Carpenter’s affidavit.
“When James approached, he advised he had a warrant for public intoxication through Payne County,” but it was verified as coming from the city of Yale and not a county charge, the Cushing officer wrote in his affidavit.
At about 12:05 am James was released from investigative detention, the affidavit said.
“As I was finishing the contact, James stated ‘I’m going to jail tonight.’ I asked James why he wanted that, and he stated, ‘So I have a place to go.’ I told James not to do anything stupid to end up in jail. James stated, ‘I won’t. I’ll bust a window or a door. I’ll see you later on,"” the Cushing officer alleged in his affidavit.
At about 12:14 am, the same Cushing officer was sent to Simpson’s Gym and Chiropractic at 1523 E. Main regarding the same man throwing rocks at the gym, the affidavit alleged.
When the officer was coming around the southwest corner of the building, “James emerged from the shadows and shouted, ‘I’m right here.’ I circled around and contacted James in the parking lot of the gym.
“James immediately stated, ‘Take me to jail.’ I asked for what and if he broke a window. James replied that he broke two of them,” the Cushing officer alleged in his affidavit.
“Sgt. Watts advised there were two windows broken from rocks,” that the owner said would cost over $1,000 to repair, the affidavit alleged.
“I transported James to the Cushing City Jail where he was booked in,” before being transferred to the Payne County Jail, the Cushing officer wrote in his affidavit.