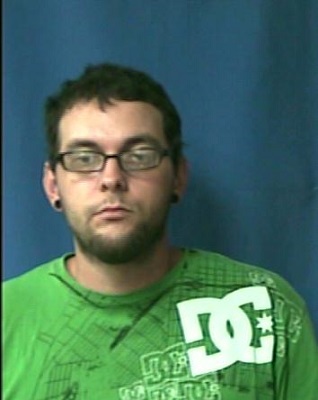 (Stillwater, Okla.) — A 35-year-old man with a history of domestic violence has been given a five-year prison term followed by five years of probation for choking and beating his girlfriend at their Stillwater residence.
Before Adam Drew Hall pleaded guilty to two counts of domestic assault and battery, the prosecution last week dismissed an additional count of raping his girlfriend, court records show.
Hall was ordered to register as a violent offender, have no contact with his victim, take a 52-week batterers’ intervention course, provide a DNA sample, undergo a substance abuse evaluation, follow any recommended treatment and take random drug tests, at his sentencing last week before Associate District Judge Stephen Kistler.
Hall was arrested at his residence at 5:35 pm on Jan. 22, about an hour after Stillwater police were called to a convenience store about an assault, an affidavit said.
Hall’s girlfriend was “sitting on the ground, partially hiding behind a garbage can near the entrance,” of the store, Stillwater Police Officer Matthew White wrote in an affidavit.
She “was crying and would jump when she saw others walking around. (She) claimed she was scared her boyfriend, Adam Drew Hall, was going to show up and kill her,” the affidavit said.
She said, “Hall had strangled her three times and rebroken her nose. (She) stated during an argument between her and Hall, Hall wrapped his arms around her neck from behind and rebroke her nose. She stated Hall let her go, she fell to the ground, and Hall then kicked her in the ribs six times. She claimed Hall told her he hopes he breaks her ribs, and they puncture her lungs,” the affidavit said.
She said after they went to the bedroom, Hall again strangled her before sexually assaulting her, the affidavit alleged. She said Hall then told her to look at him as he strangled her a third time, the affidavit alleged. She said after the attack, she ran away while Hall was sleeping to try to call her father to come get her, the affidavit said. She said, “Hall had taken her car keys from her and broke her cell phone by submerging it in water,” the affidavit said.

According to court records, Hall lived in Cleveland in Pawnee County in 2015 when he was given a five-year suspended sentence for stalking in 2014 in violation of a court order, except for six months to run concurrently with a misdemeanor domestic violence charge in 2014 for which he was given six months in jail followed by six months’ probation. Hall was also given a one-year suspended sentence in 2020 for domestic assault and battery in 2019 in Sand Springs, Tulsa County court records show.