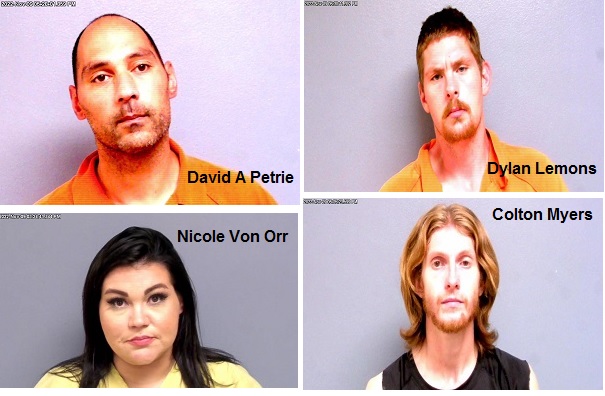 (Stillwater, Okla.) — Three men and a woman were arrested on felony methamphetamine charges after Payne County Sheriff’s Investigator Brandon Myers served a search warrant at a Cushing house in the 1100 block of E. 5th Street, with assistance from sheriff’s deputies and Cushing police.
David Alexander Petrie, 41, of Stillwater; Dylan Jeffery Prophet Lemons, 32, of Cushing; Nicole Shae Von Orr, 33, of Drumright; and Colton Blaze Myers, 23, of Agra, were ordered jailed pending their arraignments Tuesday on charges of possessing methamphetamine with intent to distribute and having drug paraphernalia.
Each of the defendants could be incarcerated for as long as eight years and fined $101,000 if convicted of their charges filed last week, court records show.
At 12:36 pm on Nov. 9, “a team consisting of peace officers from both agencies knocked on the door and announced numerous times in a loud voice, ‘police, search warrant,"” but there was no answer, the investigator alleged in his affidavit.
“The door was breached, and the team made entry into the residence. Once inside, the team detained four individuals,” who were ultimately arrested, the investigator wrote in his affidavit.
“Colton Myers was in the living room, David Petrie was standing in the doorway of the southeast bedroom, and Nicole Orr and Dylan Lemons were in the bathroom. Nicole was searched by Cushing Officer Sara Reynolds. She found a prescription pill bottle in Nicole’s bra prescribed to her for Alprazolam,” a scheduled drug, the affidavit alleged.
“The prescription was filled on 11/07/2022 for sixty bars. It was prescribed as one tablet twice a day. There were 49 bars in the bottle. If used as prescribed, there should only be four missing from the bottle, not eleven,” the affidavit alleged.
“I interviewed each suspect separately while on scene. They were all read their Miranda rights prior to any questioning,” the investigator wrote in his affidavit.
“Colton told me that he stays at the residence but doesn’t have a bedroom that he sleeps in. He said that he was there last night.
“Nicole told me that she was just dropped off there and was thinking about moving into the house.
“Dylan told me that he had walked to the house, and he had just stopped by. He said that he was there to get some Xanax bars (alprazolam). He said he had only been there a few minutes.
“David Petrie told me that he arrived at the house yesterday and only stayed the night,” the investigator alleged in his affidavit.
In the bathroom, a crystal substance and liquid were found in the toilet that later tested as methamphetamine, the affidavit alleged. On the coffee table, a crystal substance, glass smoking pipe with residue and a digital scale with residue were found that later tested as methamphetamine, the affidavit alleged.
A lockable box containing syringes, baggies, a rubber tourniquet and spoons were found on the chair across from the coffee table, the affidavit alleged.
Oklahoma identification and social security cards were found in two other individuals’ names, the affidavit alleged. A wallet containing identification belonging to another individual was found on a shelf, the affidavit alleged.
“Just inside the front door of the house, Cushing officers noticed a Mongoose FSG BMX-style bicycle that had been reported stolen from a resident a block from the house. The bike was seized and returned to the owner,” the affidavit alleged.
“In the living room was an orange case containing a Sokkisha brand Set 4 surveyor’s total station. It was marked with a Tool Watch barcode and number. I contacted Tool Watch, a company that databases tools owned by the companies for logistics and tracking. They told me it belongs to InfraSource, a nationwide construction business. I contacted them, who reported it as stolen. The value of the total station is $6,500,” the investigator wrote in his affidavit.