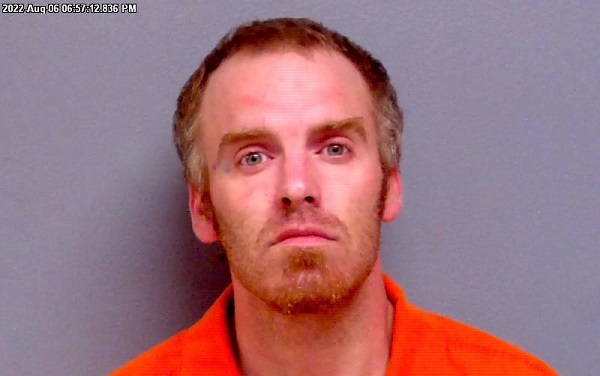 (Stillwater, Okla.) — A Cushing man on probation for domestic violence by strangulation has been jailed on $30,000 bail pending his arraignment Tuesday on charges of being a convicted felon in possession of a shotgun on July 22 and waving a pistol at two females at a house on E. Cherry Street where he was living on July 21.
If convicted of both counts, Ronald James Knickerbocker, 31, could be incarcerated for as long as 10 and one-half years and fined $10,500, according to the charge filed last week.
Knickerbocker was not found in the house by a multi-jurisdictional task force on July 22 at 1:24 am, an affidavit said.
But at 4:02 am that morning Cushing Police Officer Jason Beal was completing a search warrant on the house when he seized a shotgun with a single 9 mm round and an empty handgun holster, his affidavit alleged.
On July 21, “There was an altercation where Knickerbocker was hurting a dog,” the officer was told, his affidavit alleged.
Both females “fled the residence due to the altercation with the dog and climbed into the car parked at the residence. Realizing they forgot the keys, they went back in the house.
“While in the house, Knickerbocker came out of the back bedroom waving a handgun,” in their direction, the affidavit alleged.
“They feared he might shoot them and fled the residence in the vehicle and called the police. (They) advised Knickerbocker had the gun when they fled, but he also had a shotgun in the house as well,” the affidavit alleged.
“Officers proceeded to the residence and attempted to make contact at the residence. No one answered the door,” so police maintained visual contact on the house, the affidavit alleged.
“Deputy Chief Nick Myers was able to establish brief communication via telephone where Knickerbocker threatened suicide and claims he is no longer home, before losing contact with him. An attempt was made to contact the individual who Knickerbocker claimed to be with, but (the females) did not know any of the contact information.
“They stated they do not think Knickerbocker really left, because everyone he has is in Cushing, and he has made claims of fleeing before but hides in the house,” the affidavit alleged.
Knickerbocker was arrested on Aug. 6 when the Cushing officer recognized him as he was standing outside the house, the affidavit said.
According to Payne County court records, Knickerbocker had pleaded guilty on April 9, 2021, to felony domestic assault and battery by strangulation, for which he was placed on three years of probation except for serving 45 days in jail.