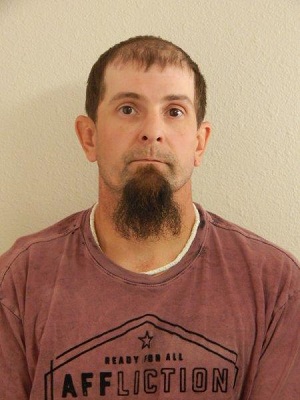 (Stillwater, Okla.) — A Cushing man jailed on $35,000 bail has been ordered to appear in court Tuesday for arraignment on charges of being a felon in possession of a stolen .22 caliber pistol, along with having methamphetamine, marijuana and drug paraphernalia — while driving on a suspended license.
If convicted, Johnathan Michael Watkins, 41, who got out of prison four years ago, could be incarcerated for as long as 13 and one-half years, according to the charges filed last week.
Watkins was arrested at 1:54 am on April 30 following a traffic stop, according to an affidavit by Cushing Police Officer Garvis Scott Thomas.
“I asked if Watkins had a driver’s license and he advised he did not. It should also be noted officers received information in the past that Watkins typically carried a small handgun in his waistband,” the officer alleged in his affidavit.
“While searching Watkins, Officer Smith noticed in plain view a silver in color handgun under the seat Watkins was sitting in. Watkins advised he did not know anything about the gun, but did confirm he was a convicted felon,” the affidavit alleged.
The gun, which did not have a magazine, but a single round chambered, had been reported as stolen in Cushing on Aug. 24, 2021, the affidavit alleged.
In the truck stuffed between the driver seat and middle seat, the officer found two bags of a white substance that field-tested as methamphetamine, the affidavit alleged.
Inside the center console, a black bag had seven syringes, another bag of a white substance, a digital scale with the same powder substance, a spoon with burnt marks and 52 empty 2×3 bags, items commonly associated with the sales and distribution of narcotics, the affidavit alleged.
“Watkins advised he knew nothing about the drugs or firearm,” the affidavit alleged.
According to Payne County court records and the state Department of Corrections, Watkins had previously been convicted of second-degree burglary in Cushing in 2009 for which he was placed on three years of probation. Four years later, he was charged with possessing a drug within 1,000 feet of a school and also marijuana as a subsequent offense, for which he was placed on 10 years of probation in 2014, but 11 months later he was found in violation of that and given two concurrent five-year prison terms. He was released from prison in March of 2018, DOC records show.